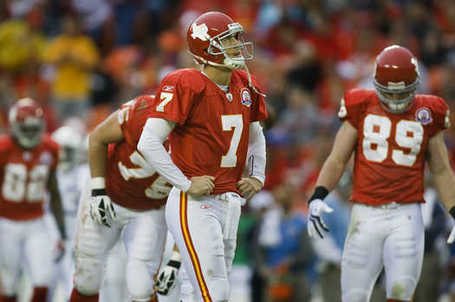 Well, that certainly sucked. On to the news.

"Disappointed, mad, a little bit of a letdown because we won a tough game last week on the road," said head coach Todd Haley. "We had as good a week of practice as we had. It was the best Friday (practice) of the year and we were excited to get to the game.

"We got our butts kicked across the board."

This was a major step backwards for Todd Haley and his team. It was easily their worst performance of the season to date, and there have been some bad ones in seven games this season.

In the 50-season history of games between these two franchises that were born the same year and have lived together in the AFC West since 1960, no San Diego team has ever administered a beating as bad as the one that went down on this Sunday. And, those 30 points could have easily been 40, because the Chargers wasted chances for another touchdown and field goal.

Chiefs Get Blasted By Chargers, 37-7 from Bob Gretz

The Chiefs were still feeling good about themselves when reality intervened. It wasn’t so much the fact that their winning streak was stopped as the way it happened.

They reverted to early-season form Sunday in a 37-7 loss to San Diego at Arrowhead Stadium. That type of defeat, coming one week after their feel-good victory in Washington, seemed to blindside everyone in a throwback Dallas Texans uniform.

"I think it did," running back Larry Johnson said. "I don’t know what was going through our heads at the time. I don’t know whether it was false happiness or thinking that … San Diego was just going to lie down because they played the Monday night game.

There was a lot of piddling going on with the Chiefs offense on the afternoon. Too many mistakes, both visible and otherwise conspired against them. There was an offensive line shuffle, when C Rudy Niswanger went down with a knee injury. Wade Smith, who started at left tackle for the injured Branden Albert, moved into center and Barry Richardson took over at left tackle.

No matter what seems to happen these days with the offense, there are problems. The Chiefs unveiled a new short-yardage/goal line scheme where OT Ikechuku Ndukwe comes in as a tight end and NT Ron Edwards comes in as a blocking back. They ran the play on a third-and-two play and despite the beef, gained just one yard.

Another Offensive Performance From Offense from Bob Gretz

It was the first punt blocked against the Chiefs since December 23, 2007, when Detroit LB Casey Fitzsimmons got Colquitt’s punt. The last time a punt block went for a touchdown was in 2000, when Raiders WR Kenny Shedd did it on January 2 at Arrowhead Stadium.

Ryan Succop missed a big field goal near the end of the first half when his 43-yard attempt just went about a foot wide to the right.

“We thought he hit it good,” said Colquitt, his holder. “There was some wind down there and we thought it would start right and then come back in. But it never moved. It just stayed there.”

Nothing Special About Kicking Game from Bob Gretz

Former Kansas State and Olathe North star Darren Sproles had reached the end zone at Arrowhead Stadium in the Big 12 championship game win over Oklahoma, but his 58-yard touchdown reception was his first at Arrowhead in four appearances with the Chargers.

“You dream of that as a kid when you grow up here,” Sproles said, “so it felt real good to finally get a score here.”

Coach Todd Haley said safety Jarrad Page was healthy enough to play Sunday but was inactive instead. Page separated his shoulder two weeks ago against Dallas and didn’t play last week against Washington.

He was replaced by Jon McGraw.

“I think he was healthy enough to play,” Haley said. “I thought McGraw played really well the last couple of weeks when he’s been in there. It’s a roster deal there where we’re trying to juggle a lot of different spots.”

“You can’t come out and play like that and think you’re going to win,” said DE Glenn Dorsey.

Defensively, the Chiefs could not handle WR Vincent Jackson in the first half, or RB Darren Sproles in the second half. Each one of those guys had a TD catch from QB Philip Rivers, who was not sacked and the Chiefs did not produce an interception.

Jackson caught five passes for 142 yards, including a pair of 51-yard gains, and all that was in the first half. He didn’t catch a pass in the second half, but then he didn’t have too.

It’s impossible to fathom what Todd Haley was thinking with his decision to try for the first down at the Chiefs’ 41 and his clock management late in the first half.

Grading the Chiefs from KC Star

Todd Haley’s game management had belied his status as a rookie head coach until Sunday’s game against the Chargers at Arrowhead Stadium. Some of Haley’s first-half decisions contributed to a 20-0 Chiefs deficit and, eventually, a 37-7 loss.

With the Chiefs trailing 7-0 in the first quarter, Haley ordered the Chiefs to try to convert facing fourth and 1 from their 41. Matt Cassel’s quarterback sneak was stopped for no gain, and the Chargers used the short field to drive for another touchdown and a 14-0 lead.

“It’s a yard,” Haley said later in defending the decision. “Would I like to have that one back? I might. I was aggressive-minded. It’s a play we practiced. I know it’s just a quarterback sneak . . . We thought we had the look we wanted and we snuck the ball and didn’t get it.

“We’ve obviously got to be better at sneaking it or it’s a bad call, one or the other.”

Haley defends some of his questionable decisions from KC Star

There wasn’t much to say. The big plays happened, the Chiefs were blown out, and a group of discouraged and overmatched defenders struggled to explain why.

San Diego used six plays that gained at least 20 yards, including two 51-yarders that made Kansas City’s secondary look bad — and the team’s locker room look discouraged and confused after the Chargers’ 37-7 walloping at Arrowhead Stadium.

“That was pretty embarrassing,” Chiefs cornerback Brandon Carr said. “To get beat by that large margin.”

But it's also telling that a player would speak out against Haley, whose unorthodox coaching style could understandably rub some players the wrong way. The first-year coach is intense most times, harsh at others, and over the top occasionally. Regardless of how bad a team is and has been, an NFL locker room is an immensely proud place. Players are proud to have reached this level of success, personally and professionally, and some don't like being coached and spoken to like children. In those players' defense, Haley hasn't taken much blame for his questionable play calling and decision-making the last few weeks, and I can see how doubt might creep into the locker room of a 1-6 team.

Is LJ speaking for only himself and offering just the latest in a long line of outbursts? Or he is just the first to speak out against a growing sense of discomfort and unpopularity?

LJ's rant, the apparent shots at Haley, and what it all might mean for the Chiefs' locker room from KC Star's Red Zone

Whitlock Alert (though I think it should be read by all)

...You don’t appear to understand your job.

Head coaches don’t coach on Sundays. They coach six days a week and then on Sundays, they make a never-ending series of rational decisions. You’ve chosen to call the offensive plays, which means you’re required to make far more rational decisions than a head coach who chooses not to be offensive or defensive coordinator.

You’re consistently making irrational decisions because you’re trying to coach on Sundays. As a head coach, you have to think on Sundays. Trust your assistants to coach. Let them do their jobs.

Mass exodus: We have never seen a stadium so empty before the end of a game as Arrowhead was yesterday. There couldn't have been more than a couple of thousand out of the original 69,337 on hand. The fans are fervent here, but not insane. Their team played horrendously, it rained, and lightning began to flash in the second half. At that point, they'd seen enough of the Bolts.

The Chargers were smiling as they ran in from the rain.

Powder blue-clad fans, pretty much the only ones left in Arrowhead Stadium yesterday, lined the stands above the tunnel to the Chargers' locker room, cheering Norv Turner's team in the house that Marty built.

Team President Dean Spanos stood outside the locker room, congratulating every player and coach that passed.

It was a victory.

Smilin' in the rain from San Diego Union-Tribune

Four times the Chargers had possessions inside the Chiefs' 5-yard line, but they managed only one touchdown — Malcom Floyd's 3-yard catch in the first quarter. They had to settle for two Nate Kaeding field goals and got nothing on a third attempt when head coach Norv Turner dug in his heels and kept trying to get LaDainian Tomlinson his first touchdown since the season opener.

Rivers, of course, saw that glimmer of sunshine peeking through the storm clouds that hovered over Arrowhead Stadium all afternoon.

“I think the fact we got some of those plays on tape, there in that goal-line formation . . . it's a lot easier to correct those coming off a win,” Rivers said. “I think it will continue to make our O-line and those guys even much more hungry to run it into the end zone.”

BFlowers24 chilln bout to relax...plannin on hosting the party in miami for my girl starr at mansion on the first....hope i can make it.....cant wait

There were some others by LJ, but they are being documented already. =)

Adam_Schefter All not lost for Chiefs RB Larry Johnson. Just think how people once had written off former Texas RBs Ricky Williams and Cedric Benson.

ChristianOkoye If The CHIEFS can't beat Chargers in KC something is wrong.

Adam_Schefter After one game, Michael Crabtree has one more catch than Darrius Heyward-Bey does this season.

kb_kcstar Hate to bring this up and all, but LJ has a history of getting into trouble during bye wk. He was arrested during last year's open weekend.

Eustus: Honestly, given the way Haley has behaved since he arrived, is anyone surprised that the Chiefs haven't improved?

monkeyridesdog: Why is it that ex-Chiefs keep showing up in the Sports Center highlights?

Honore_et_Amore: Why are the Kansas City Chiefs paying Matt Cassel $30 million to be worse then he was last year, it just makes no sense.

roncutler27: tired of the chiefs loosing

Chipotle: Via Deadspin Chargers 37, Chiefs 7 A rivalry? Now it's like a nonconference college game, just meant to make your team look good.

Matriculating: Man I want the CHIEFS to get better!!! Looking forward to the Running Back controversy...

speedopimp05: greinke for chiefs QB? Discuss amongst yourselves...