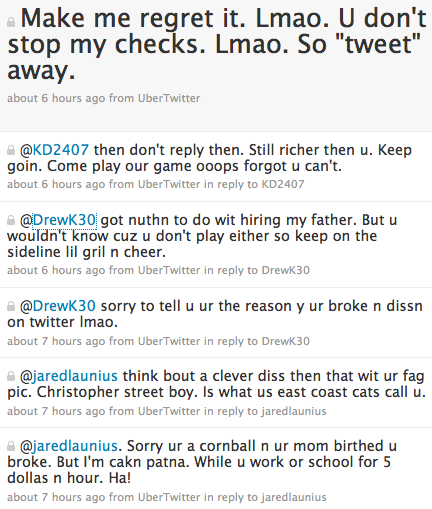 Back in August I was asked to write a piece for the Washington Post on Twitter and what Roger Goodell's policy on the social networking site should be. My argument was simple - Forget the medium.  Who cares if it's Twitter, a post-game press conference or a locker room interview?  Treat Twitter just like you would a player speaking in any other public arena.

Here's what I said then:

It's not the enemy. Players are going to run their mouths on Twitter and they're going to run their mouths at practices, in interviews and after games like they've always done. Keep doling out the appropriate punishment for speech infractions as well as those with cell phones and the web. The players will learn it's not in their best interest to broadcast every piece of information to the world.

That last sentence?  Yeah, not all players will learn it's not in their best interest to broadcast every piece of information to the world.  Kansas City Chiefs RB Larry Johnson has not learned that.  Here's what LJ said on Twitter last night:

That's exactly what LJ said.  The post has since been deleted.  I took a screen shot of the quote since I figured it would be deleted soon.

I went to bed shortly after that which means I missed the continuing war of words. LJ didn't stop there.

He went on to say "U dont stop my checks. Lmao" (Lmao = "laughing my ass off") and said fans can't play this game because they don't make as much money as him.

Perhaps the most troubling tweet was a derogatory term in regards to another fan's picture. Well, you can see in the picture above what he said. Christopher Street is a famous New York City street that is a symbol of the city's gay-pride movement.

It's disappointing and, most importantly, it's stupid.  Behavior like this can warrant action from the organization.

Look, LJ, we get that you're frustrated and you want out.  I hear ya.  You're closer to the end of your career than the beginning.  But, if/when you hit the free agent market, what's less appealing about a 30 year old back that can't average more than three yards per carry?

A 30 year old back that is a malcontent and publicly calls out the coach and the fans.

(Editor's Note: I know this is an upsetting, emotional topic so everyone please react like adults.  No slurs or gratuitous language of any kind will be tolerated here.)