An interesting tweet has come across from Kansas City Chiefs RB Larry Johnson.

LJ is under 100 yards from the franchise rushing record but has been slow starting this season.  It sounds like he's showing some frustration with this: 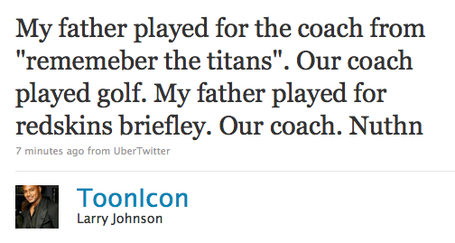 As many of you know, Todd Haley did not play college or professional football.  He went to college on a golf scholarship.  We've talked about this before but I don't think this should matter much.  I don't think there's much of a correlation between playing career and coaching career.

But LJ is apparently venting here, which is one of the downsides of Twitter. Earlier this month, Larry tweeted out "Ego" a number of times, possibly in reference to Todd Haley.

LJ has gone off on a couple of occasions but has been supportive of the Haley and Pioli regime since the start of training camp. This is the first real sign of frustration we've gotten from LJ in a while.

The tweet prior to this one said his father had more credentials than most of these pro coaches.  LJ's father is a pretty well-known defensive line coach for Penn State.