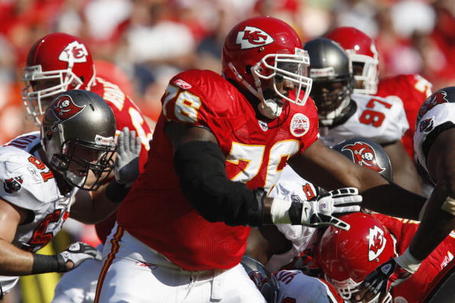 From the FanPosts. Bumped it up to now from last night. Thanks DJ. -Chris

JJ Cooper at AOL Fanhouse has a very nice complilation of sacks allowed for NFL Tackles through Week 5.

I think it will be pretty eye opening for those under the mistaken impression that Brandon Albert is not suited as an NFL Left Tackle.

Through four games this year, Albert is credited with only 2.5 sacks. All five of the Chiefs opponents this year rank in the top 10 for sacks this year.

For context, Jordan Gross, who was a free agent last offseason and was a player many Chiefs fans were hoping Pioli would pick up, has surrendered 5 sacks. Jake Long, the #1 overall pick in the same draft Albert was selected, has given up 3. Ryan Clady, Jeff Otah and Joe Thomas have given up 2, only half a sack less than Albert. Though Cooper apparently forgot about Jacksonville's Eugene Monroe, this article indicates that Monroe had given up 6 sacks through three games (written before Week 5 vs. the Rams).

For those wondering, Ryan O'Callaghan is credited with giving up 1 sack in his short time at Right Tackle.

I thought this particular piece of info regarding TE Sean Ryan was particularly damning:

The Kansas City Chiefs may need to rethink some of their blocking schemes. Tight end Sean Ryan gave up his fifth sack of the season on Sunday against the Redskins. No other tight end in the league has given up more than two sacks this year.

Ryan bounced round to three different teams last year, so he's fortunate to have a starting job, but the Chiefs are asking him to do things that he's not really capable of doing when they ask him to handle defensive ends one-on-one.

This confirms what has frequently been discussed here at AP about the weakness of our tight ends in pass protection. But even more so maybe its an indication that Haley still has not dumbed down his play calling enough for the talent he has. Haley has some very nicely drawn up plays, but if the players he has on the roster are not talented enough to execute it, maybe its time to simplify things a bit.