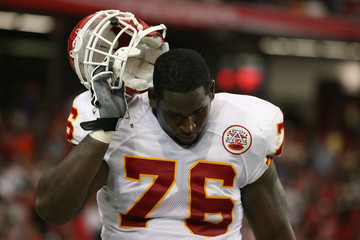 The Kansas City Chiefs took the field today in preparation for the San Diego Chargers on Sunday.  As we noted in various posts this morning, there were two new and one familiar face on the field.

New addition to the active roster, Kenny Smith, was on the field wearing No. 90.  Practice squad addition Marlon Favorite was practicing in No. 93, Tank Tyler's old number.  Kolby Smith also returned to practice (presumably wearing No. 21).

Two players were also missing from practice according to Josh Looney and Bob Gretz.  Branden Albert, who did not travel with the team to Washington last week because of an ankle injury, and Mike Goff, who was not on the field at all today, did not participate in practice.

Albert's injury is worrisome and has caused a bit of a chain reaction.  To prepare for his absence last week, the Chiefs activated Barry Richardson (which opened a practice squad spot for Favorite) and activated Ikechuku Ndukwe for the Redskins game.

In a sign that Albert's improving, he was not in a walking boot today and was seen running and jogging (via Bob Gretz).

Goff's absence is unknown at this point.  He has had no reported injuries since missing a handful of plays against the Dallas Cowboys a week and a half ago.

The Chiefs will release an injury report later this afternoon with a few more details on the absence of these players and Gretz might have some more information when his practice report is updated shortly.