Chiefs DE Dorsey Plays Up at the Right Time, Happy with Victory

Share All sharing options for: Chiefs DE Dorsey Plays Up at the Right Time, Happy with Victory 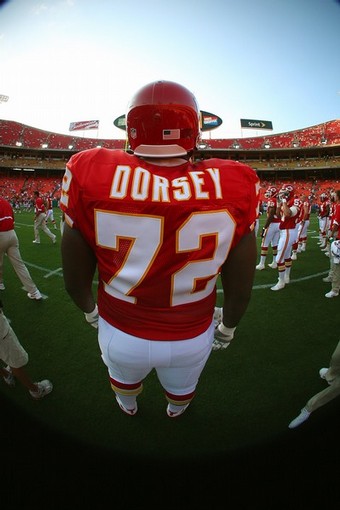 One more thing I learned after Sunday's game -- Glenn Dorsey is a fun, happy-go-lucky guy after a victory.  I always got the impression that he was one of those guys that naturally had a positive disposition but he had extra smiles and laughs after the Kansas City Chiefs first victory of the season over the Washington Redskins.

"It's kinda good to win," Dorsey said before he stopped to correct himself. "Actually -- not kinda -- it's great to win and we're heading in the right direction."

I was waiting for that last sentence for a reason.  Just about every time I've been around Dorsey he fits that line in there: 'We're headed in the right direction.'  He really is a believer in what Todd Haley and Co. are doing, even if it is a position switch, and it shows.

"The stuff we're doing is working and it's a great feeling," he said.

That "stuff" has been a long offseason of change and criticism for the former defensive tackle.

"During the week, we work so hard," he said. "Coach is not taking it easy on us."

And don't expect that to change anytime soon.  I asked Matt Cassel if yesterday's victory changes anything in terms of the their preparation for San Diego next week and he said nothing changes, which presumably means Todd Haley won't let up.

The Chiefs didn't let up on Sunday, either, because they've seen it before.  In the last year, it seems every time the Chiefs have a game wrapped up, something happens.  60 yards for Miles Austin happens.  A JaMarcus Russell drive happens.  A Dwayne Bowe fumble on an onside kick happens.  Whatever it is, it's always something.

That's why Dorsey and Co. weren't sure of their victory until it was done.

"When Tamba got the safety," he said when asked when he knew victory was apparent.

"You don't know," he said, "anything can happen.  We've seen games where we've been on top and let them come back and win."

"We didn't ease up until Tamba [Hali] got that safety," he said.

Speaking of Hali, his safety was a nice ending for a defensive line that's received more criticism than any other position group on the team over the last two years.

"We were in a three man front," Dorsey said describing the safety, "we knew they were throwing the ball.  Tamba was one-on-one on one end and I was on the other and he beat his guy clean and made a hell of a play."

The trade deadline is a few hours away and the rumors are certainly swirling. The coaching staff was unhappy with his weight coming into training camp.  He initially had trouble making the transition to defensive end.  He's got one of the biggest contracts on the team.  The new regime took defensive ends with its first two picks in the NFL draft.

His critics have some ammo to prompt folks to pay attention to these trade rumors.

Despite all that, Dorsey might have had his best game of the season on Sunday.  There is improvement, it's hard to argue that, but I think his perseverance to improve every day, and demonstrate that on the field, is the biggest reason this coaching staff is now high on Dorsey.

But what do I know?  I thought the Chiefs wouldn't win a game until November.