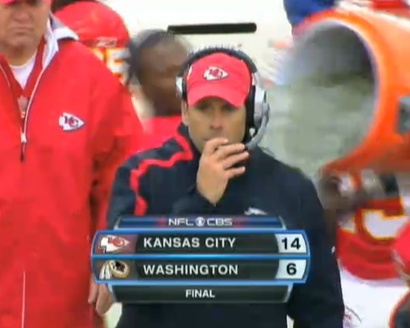 Congrats, Mr. Haley.  Your first victory as a head coach in the NFL is something I would imagine everyone holds very special.

For the Chiefs head coach, he might remember it as much for the cold and wet conditions on the field as the Gatorade bath he received from his players once it became apparent the Chiefs were going to prevail.  Here's a shot of Haley just moments before getting drenched.

"It was not something I factored into the equation," Haley said of the unexpected bath.  "I’ve heard some negative feedback on my bath but I enjoyed it once I realized what was happening."

I couldn't tell that there was a bath from my vantage point but I heard about all this from one of the players in the locker room.  This player also said they wanted to make sure the game was completely in hand before worrying about celebrating.

"The game wasn’t over," the head coach continued, "and I’m the worst. I’ve got to see zero, zero, zero and then I’m still looking for a flag before I believe it’s over. That’s just the way I’ve been taught by my father."

"My father is a football guy and he’s continued to tell me it’s a process. Right now it’s about getting better every day and I’ve tried to stay true to that. My wife is a crazy person is on game day."

He said he flipped on his phone after getting back to the bus and saw quite a few messages from friends and family.   "First of all," he said, "a lot more people than I thought cared about me, or were pretending to. That hit me a little bit."

Shortly after the game yesterday, he said he intended to enjoy the victory.  "I’ve been waiting to enjoy one of these," he remarked in his opening comments after the game.  "I will enjoy it."

But only for the plane ride home.  The Chiefs were back to work today preparing for the San Diego Chargers.