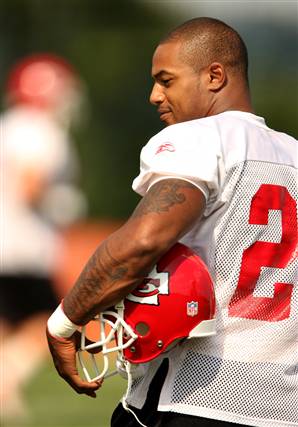 Kansas City Chiefs running back Larry Johnson talked with us after the game and you could tell this was a nice win for him.  LJ is from the area so he had people calling him and texting him all week he told us.

In short, this is what LJ had to say about the victory: "It just felt good."

He ended the game with 83 yards rushing but was, for the first time in quite some time, a valuable part of the victory.  Here his quarter-by-quarter breakdown of yards:

That 3.6 yards per carry certainly isn't a great average but it's a significant upgrade for the Chiefs running game and Larry Johnson

"No matter who's coaching, the coach of the Kansas City Chiefs has always been about the running back," LJ began at his locker after the game.

"Going back to Ed Podolak, Marcus Allen when Joe Montana was here, to Priest when Tony Richardson was here...The running game is what fuels this organization," he continued.