Chiefs Preparing for a Cold Sunday Against Redskins

Share All sharing options for: Chiefs Preparing for a Cold Sunday Against Redskins 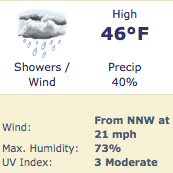 The Kansas City Chiefs practiced outside today despite the colder conditions.  It's currently about 50 degrees in Kansas City and, as Bob Gretz points out, previous head coaches likely would have moved practice indoors.

Not these Chiefs, though.  Head coach Todd Haley came from Arizona where the weather was nice year round.  Those Cardinals didn't get an opportunity to experience midwest weather.

"I just think that having been in Arizona for two years," Haley said, "I really thought that was something that hurt us – the fact that it was too nice all the time. We were never in the mental mindset to play in those conditions."

I've talked before about building a team that matches your environment.  For example, was it the best move for the New York Jets to play Chad Pennington a few years back?  He has what many experts have called a weak arm and the Jets play in one of the windiest stadiums in the NFL.  Not a good combination.

On the flip side, in the 90s the Chiefs had a perfect team for their conditions.  A stout defense and a hearty running game (at times) for a team that could play half their games in cold or snowy conditions.

Haley understands the value of having a team that can benefit from the home city's weather conditions.

"I think it can be a huge advantage for us here as long as it’s not holding us back," he said. "I think the fields are a little bit of an issue when it’s messy but I still think the benefits outweigh the negatives. I just think it’ll help develop the mindset that we need to be a championship team."

Last week, the Chiefs had to move practice indoors due to puddles on the field but Haley told the media that he tried his darndest to practice outside.

As you can see in the picture, courtesy of the National Weather Service, the high on Sunday will be in the mid 40s with a chance of showers.