Share All sharing options for: Portis Had One of the Best Fantasy Days Ever Against the Chiefs 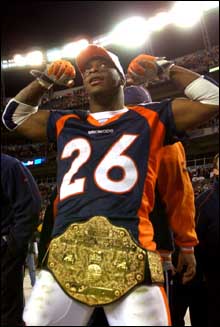 If you were a Clinton Portis fantasy owner in 2003, or played against him that year, then you know what game I'm talking about.  December 7th, 2003 Portis and the Denver Broncos put up 45 points on the Chiefs.  Mr. Portis was responsible for FIVE of those touchdowns.

Oh, yeah, he had 218 rushing yards to add to his 36 yards receiving.  From what I can recall, this was the best fantasy football day ever.  At least in the types of scoring leagues I've played in.

After the game, as the Kansas City Star remembered this morning, Portis put on a heavyweight wrestling belt and claimed victory over then the best back in the NFL, Priest Holmes.

Holmes had 12 carries and seven receptions for a total of 77 yards and two touchdowns.

Portis had more total yards that season, and put up 14 touchdowns, but Holmes trumped him with 27 rushing touchdowns (then a NFL record).

The Broncos ultimately came out on top with a 45-27 victory but I'll remember that game for Portis' big day.  Ryan from KC Chiefs Blog weighed in on this today as well:

"That Denver game still bugs me in a special sort of way," Ryan said.  "Outside of a Chiefs victory Sunday, the only thing I want to see is Portis get completely shutdown."

And we can't have a mention of the Broncos without recognizing Mr. LHP, Jake Plummer.