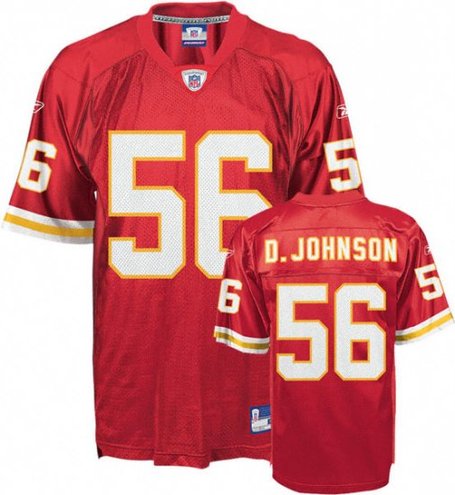 The last 48 hours have seen more and more talks in the media of a possible change of scenery for Kansas City Chiefs linebacker Derrick Johnson.  For many, the rumors heated up on Monday when head coach Todd Haley declined to discuss DJ's absence in the starting line-up, instead praising his replacement, Demorrio Williams.

Chiefs GM Scott Pioli has gone on record to say that he has not had any trade conversations involving Derrick Johnson, nor has anyone approached him about that.

Even though Pioli hasn't had those conversations doesn't mean they're not taking place somewhere in the league.  Jason LaCanfora of NFL Network, citing multiple personnel folks around the league, reports that a deal could get done....for the right price.

"Another Chief to keep your eye on is linebacker Derrick Johnson," he said.  "He hasn't been playing much this season and there's a sense among personnel people that if you threw the right deal at Scott Pioli he might make a move."

Well, isn't that true for just about any Chief, save maybe Matt Cassel and Tyson Jackson?

More from LaCanfora on Glenn Dorsey trade rumors after the jump.

LaCanfora also relayed the feelings of a few personnel people around the league in regards to Glenn Dorsey, who of course was the subject of many trade rumors prior to the draft last April.  We're still trying to track down exactly what the cap hit would be, but for now, we can safely assume the Chiefs have the room to make a move (if they were willing to pay the real money to a guy not on the team).

"There are teams that are going to be looking to make a move," LaCanfora reports.  "The cap ramifications would not be that huge."

Despite what's been pointed at in this space as positive steps for Dorsey over the last month, LaCanfora continues to report he's "heard from numerous league sources that the coaching staff is not very high on Glenn Dorsey."

Until I get my hands on the exact cap hit if he were traded, and the names of teams that might be interested, I'm going to hold off on my opinion of these situations.  But that doesn't mean the speculation stops - possible destination for Dorsey?

"San Diego is a team," LaCanfora says, "[Chargers GM] A.J. Smith is on the prowl for defensive tackles but I'm not sure you'd see a move in the division there."

Speaking of the Chargers, there's also a sense amongst some league execs that Shawne Merriman can also be had for the right price.  Per LaCanfora, a long-term extension anytime soon would be shocking.

"There's definitely some personnel people out there who feel like if you have a real interest in Shawne Merriman, he's by no means untouchable and there's potential to work something out."

Even though he's their best defensive player?