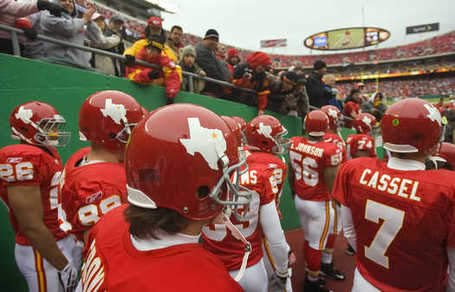 Tuesday is the day in which teams generally work out many free agents to immediately address an issue or to prepare themselves for future or lingering issues.  It's usually the most active personnel day of the week garnering the nickname Transaction Tuesday.

Today is no different, except that quite a few former Chiefs, and other players of interest, are being worked out across the league.

The Chiefs haven't made any roster moves....yet.  Last week was the first week of the season no moves had been made.  I'm sure the team is working players out today, as many others are, but I wonder if any will be signed - GM Scott Pioli is on the road for some college scouting today.

Anyway, after the jump is a bunch of semi, kinda related Chiefs news on Transaction Tuesday.  Hey, I said it's a slow day.

Of course the big one is Damion McIntosh being signed by the Seattle Seahawks.  He previously worked out for them.

The Houston Texans released LB Buster Davis and worked out two former Chiefs in search of his replacement according to Aaron Wilson of the National Football Post.  Monty Beisel and Rocky Boiman were the former Chiefs while the Texans also lost a guard for the season prompting them to take another look at Adrian Jones, who had previously been with the team.

Maybe Levi Jones really has lost it.  He worked out for the Detroit Lions today according to Jason LaCanfora of NFL Network. It's interesting that the Packers opted to bring back Mark Tauscher, coming off of knee surgery, rather than Jones.  Tauscher knows the system but Jones is younger.

The Ravens made two roster moves with slight Chiefs connections.  First, David Tyree was signed.  The Chiefs worked him out at the beginning of the season.  Second, to make room for Tyree, former Chiefs TE Tony Curtis was released.

WR Matt Jones tried out for the Bucs today.  How far has his fall been?  Tampa signed Yamon Figurs instead.  ESPN reports that at least half a dozen teams have expressed interest in Jones in recent weeks.  He also tried out for the Titans with no contract offer.

The Buffalo Bills are in serious linebacker trouble.  In an interview I talked about earlier today, Chiefs GM Scott Pioli was asked about trading LB Derrick Johnson, with Buffalo being used as an example of a team needing linebackers.  Instead the Bills tried out seven linebackers, including former Chief (and former Bill) Pat Thomas.  The Bills went with Chris Draft instead.