Mort: Chiefs' Compensation in Thigpen Trade Is a 5th Round Pick

Share All sharing options for: Mort: Chiefs' Compensation in Thigpen Trade Is a 5th Round Pick 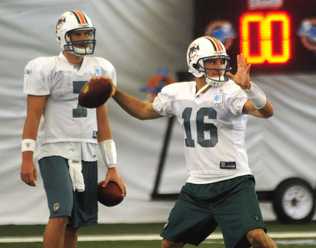 Prior to last night's Monday Night Football game, Chris Mortensen of ESPN (which we heard via all the Dolphins message boards and Twitter) said the compensation for the Chiefs in the trade that sent Tyler Thigpen to Miami was a fifth round pick.  This is what we expected it to be back on September 29th when the Chiefs pulled the trigger.  73% of those polled agreed with the decision and the compensation.

Mort had another interesting nugget - before the trade was executed, Chiefs head coach Todd Haley was planning on experimenting with Thigpen at wide receiver.

Really?  That's where we are?

I know we've been searching high and low for wide receivers but Thigpen?  I would hope that this would be in some sort of wildcat-esque package.  Unless he's in a position where he's a threat to throw, Thigpen at wide receiver doesn't make any sense to me.

This just shows that the Chiefs are searching high and low for receivers.  In other words, Bobby Engram being inactive yesterday may be a sign of things to come.

While we're on the Thigpen topic, interesting story: Remember when he first came to the Chiefs and asked for No. 16?  Don't make fun - Matt Cassel did the same thing. Anyway, the Chiefs told him there was a guy by the name of Len Dawson who had that number.  Thigpen's number in Miami?  No. 16 (which you can tell from the picture above).

But, with that fifth rounder, here's how the Chiefs draft is shaking out next season: