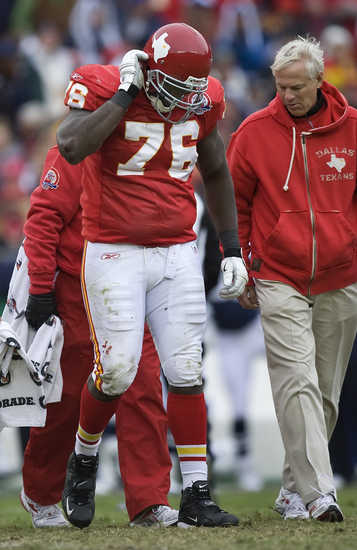 After Kansas City Chiefs LT Branden Albert had his leg rolled in yesterday's loss to the Dallas Cowboys, there was a gasp around Arrowhead.  The offensive line is already a weak spot and the only true future of that line just went down.  Add that to the fact that Matt Cassel was already getting punished on the majority of drop backs, and there was some serious cause for concern.

The trainers took Albert off the field and he took a seat at his normal spot, on the far right bench, with the rest of the offensive linemen. To be honest with you, I had to go back and re-watch the next few minutes of the game because my eyes were focused solely on Albert (considering the chances of me getting any information from the Chiefs on Albert's injury were slim-to-none).

Two trainers were attentive to Albert for about ten minutes.  They were looking at his left leg.  From my vantage point, I couldn't tell exactly what the trainers were doing to his leg but he stood up with a heavily taped left ankle.

"We taped him up a couple of times yesterday," Chiefs head coach Todd Haley said today.  "He wanted to come back in and it just wasn’t meant to be."

Now, the decision not to have Albert return was either due to the severity of his injury, the adequate play of Wade Smith, or a little bit of both.  I really thought, considering the circumstances, Smith did an okay job. I know, I know...he definitely wasn't perfect (and I haven't even mentioned the holding call in OT).

"I was proud of the job Wade (Smith) did coming in there and fighting it out and not having a lot of reps at the spot," Haley said

But think about this: We talked with him in the locker room after the game and he said he hadn't played tackle since 2004.  He's the swing guy on the offensive line, meaning he can really play any of those positions.  He was asked how many reps he got in practice last week and he wasn't quite sure but did say he had some time out there.

"Most of his reps come on the show team which is an important part of their being ready to play," Haley said today.

We'll have to wait until practice to really determine the severity of Albert's injury.  If he's not out there taking reps, then I'll begin to worry a little bit.  But from what I saw yesterday, I believe Albert has a very good shot to be available next week.  I really did think he would come back in yesterday.

"I was nervous the whole game," Haley said when asked if he was nervous when Albert and then later Goff went down.  "That’s part of that final drive deal that we’ve got to build on. Easy to find a lot of negatives but we’ve got to look for positives and I think that’s a great positive for us to build on."

Albert is sore today, per Haley, and will be evaluated further tomorrow. Goff's injury doesn't appear to be serious.

I've got a lot of money that says Haley is non-committal on Albert all week.  Why give the Redskins an advantage?