Notes on New Chiefs Plus Pollard to Texans' First Team

Share All sharing options for: Notes on New Chiefs Plus Pollard to Texans' First Team 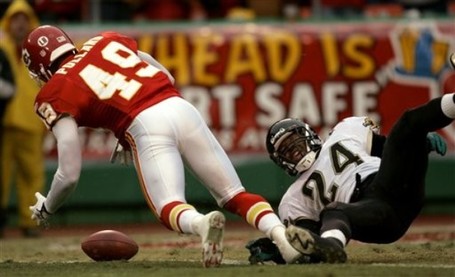 I've got a few notes on a few of the new Kansas City Chiefs players.  We've already covered Leonard Pope, the new tight end but haven't talked much about Chris Patrick, Mike Richardson and David Herron.

I've also got a nugget on former Chief Bernard Pollard.

Former Kansas City Chiefs safety Bernard Pollard was without a job for several weeks.  He had a workout with the Houston Texans and eventually signed with them before being inactive in his first contest last week.  This week, however, things are much different.

Pollard has been taking first team reps this week and could possibly start against the Oakland Raiders on Sunday.  Learning the playbook is easy, much like Leonard Pope with Todd Haley, because Pollard is familiar with the Texans secondary coach, David Gibbs, who spent time with the Chiefs.

"The playbook is pretty much like we had in Kansas City the first couple of years," Pollard said. "Gibbs was my coach there, so I know the bulk of it, and I feel like I can go out and help my teammates. We really want to win. We saw a game slip by last week that should not have, but it's a new week, a new team, and we've got to go out there and we've got to play ball."

The Texans have had some troubles in the secondary so Pollard will get an opportunity to make an impact early.

He's bounced around the league for a couple years playing with half a dozen different teams.  I found a pretty cool interview of Patrick as he headed into the supplemental draft a couple years back.  It's a pretty good read, which you can read here.  Here are a couple of highlights.

What position do you expect to play?

"I’ve heard every position on the line except for center. I can play tackle, but I can also play guard so that’s just another valuable asset that I can do. A team can put me wherever they want and I can bring multiple things to the table because of my versatility.

What NFL player do you compare yourself to?

"Matt Light from the Patriots. I’m comparable in size and ability. I always admired guys like him and the Broncos Ben Hamilton. Hamilton isn’t very big but he is very effective and knows exactly what he should be doing on every play. I played in a zone blocking scheme under coach Callahan like they run in Denver so I can appreciate what goes into it."

Pats Pulpit fills us in on Mike Richardson

I asked Pats Pulpit to give me a few notes on the newest Chief and former Patriot Mike Richardson:

"Mike Richardson missed his rookie 2007 season due to an injury, but ended up being a solid special teams player, frequently recording the highest number of special teams tackles in a game.  As a backup corner, Mike would grab some reps but, ultimately, was the victim of a deep cornerback corps.

"As his Patriots experience suggests, he will fit well on special teams, but will most likely see little time on a team with sufficient depth at corner."

Daily Norseman fills us in on David Herron

I asked Gonzo from the Daily Norseman to give us a few notes on former Viking and new Chief David Herron:

"The most regular season action I remember him getting was last year against Tennessee after primary middle linebacker E.J. Henderson got injured.  He filled in at middle linebacker for the better part of the afternoon, and the team was so impressed by his performance at MLB that they signed former Viking (and former Chief) Napoleon Harris shortly thereafter, and Harris was the starter at MLB the rest of the way.

"He might be a better fit in the Chiefs' 3-4 system than he was in a 4-3 in Minnesota.  Like I said, he's a pretty good run-stopper, but doesn't offer much in the way of coverage ability.  He'll also help the Chiefs on special teams.  He's not really somebody that you can build a defense around or anything, but he has a chance to be a solid contributor in Kansas City."