Chatting about the Kansas City Chiefs vs. New York Giants

Share All sharing options for: Chatting about the Kansas City Chiefs vs. New York Giants 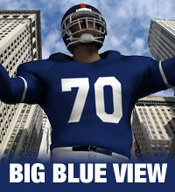 Today marks the first day our complete attention will be focused on the New York Giants.  To better understand the Kansas City Chiefs next opponent, I held a chat with Ed Valentine over at Big Blue View, the Giants blog.  Ed's definitely a New York guy - he runs the SB Nation Yankees blog as well (which you can tell when he uses the word "Steinbrenner-ism" in our chat below).

Ed and I held a chat to talk about this weekend's game.  I like this format and think we'll try it again (unless many of you object).

Q&A below with more after the jump.

Joel: Question No. 1: The Chiefs have a below average offensive line that has trouble protecting the quarterback. Are the Giants normally able to get pressure on the quarterback by rushing just four linemen?

Ed: The Giants have just three sacks in three games, but that is misleading. They have a terrific, deep front four that is a little thin right now because of injuries to Chris Canty and Justin Tuck. They will come with four and try to harass the quarterback, which they have done well even if they haven't piled up sack numbers. They are a defense built on pressure, and they will be coming.

Ed: Here is one for you. To be honest I thought the hiring of Todd Haley as head coach was a huge mistake. Your thoughts on Haley thus far? is he up to this job, or in over his head?

Joel: It's hard to tell. For the most part, a lot of the key players have bought into what he's trying to here so I think that's a good sign. It's too early for any revolting anyway, in my opinion. Haley has been preaching consistency and toughness which, frankly, the Chiefs haven't shown much of.

So, while I think players do want to buy into the system, and many have, they've yet to demonstrate that on the field. Haley's demeanor is the exact opposite of our previous coach, Herm Edwards, so I expected there to be some backlash (and there has, like Brian Waters, but not as much as I previously though).

Ed: A Matt Cassel question for you. There are rumblings that maybe bringing him in and giving him a huge contract was a mistake. Too early to tell? What are your impressions thus far?

Joel: Definitely too early to tell for me. I think it's really people being upset that the Chiefs are currently 0-3. Cassel's numbers aren't fantastic by any means but he's still completing 67% of his passes which, even with the small sample size, is a good number.

Remember, this offensive system was basically brought on a week before the season when our previous offensive coordinator, Chan Gailey, was relieved of his duties. The offensive line, more than anything, is to blame for the poor offensive showing.

Ultimately, though, the offense as a whole is struggling and the quarterback will almost always take the blame for that.

Joel: Ed, Eli Manning got a big extension over the offseason. What was the reaction to that? Based off his 2008 numbers he deserved, but prior years would indicate otherwise.

Ed: Well, there are some people who will never give Eli credit no matter what. He's a Super Bowl MVP coming off a Pro Bowl season -- a franchise guy the Giants want to lead them for the next 7-10 years. They paid what they had to pay to make that happen. Eli is playing tremendous football right now -- he has a 104.1 QB rating, the highest in the league. Like I said, he will never make everyone happy. But, the Giants are lucky to have him.

Ed: So, tell me. At 0-3 are you optimistic that things will get better for the Chiefs this season, or resigned to this being a rough year?

Joel: To be honest, I think it'll be a long year, which is really frustrating. The offensive line is, in my opinion, the biggest problem at this point and the chances of the Chiefs finding a solid offseason lineman in September or October is slim to none. Until that's fixed, I don't see this team doing a whole lot. The strides we've made on defense relative to 2008 will help, but this team still has a long, long way to go. My early season prediction of six wins isn't looking good at this point.

Joel: Is it Super Bowl or bust this year for you guys?

Ed: Some fans would probably say yes, but I hate that thinking. Even though I'm also a Yankee fan, it's creeping Steinbrenner-ism, and it sets you up to be permanantly miserable. The Giants have a good shot at the big prize this season, but so many things can happen. I will be disappointed without an NFC East title, and without a deep run in the playoffs. But that doesn't mean the season is a failure. In some ways, it is already a success. The Giants have already found several exciting young players who should help them for a long time.

Ed: Tell me about players on the Chiefs we might not know about who we should watch out for on Sunday?

Joel: There are a handful. TambaHali was kind of lost in the shuffle to the 3-4 but he's really starting to become a decent player in this scheme, which is surprising. We're becoming pleased with him. BrandonFlowers is another young one that's impressive. He's one of the better young corners in the league and played well last season despite the Chiefs NFL record (for futility) 10 sacks. He's been a little banged up this year but will be ready. Jamaal Charles is another young one we're excited about.He's quicker than a dart and has helped this offense.

Ed: Here's one last question for you. I love to ask this one. If you could take one player off the Giants roster and put in your lineup, who would it be? Why?

Joel: That's a difficult question because I think the Giants are an example of the "right 53"  not necessarily the "best 53" so I will go with Brandon Jacobs. With the Chiefs offensive line, we need a running back that can get some yards on his own. Plus, I would very much enjoy lining up with Jacobs on the Chiefs in Madden.

Joel: Same question back at ya....if you know any Chiefs!

Ed: Honestly, a tricky question for me to answer. I truthfully don't know your roster that well. If you are that high on Flowers, I might take him. The Giants are depleted by injuries in the secondary, and as much as I like the corners we have the only guy I am 100% sold on is Corey Webster.