Over two years ago, when QB Tyler Thigpen was claimed off of waivers by Herm Edwards and the Kansas City Chiefs, my post on the subject ended with this:

"Out of Coastal Carolina, Thigpen appears to be nothing more than a body at the no. 3 QB spot."

Eleven starts and sixteen game appearances later, I must confess I was wrong.

After the jump,  I do my best to chronicle Tyler Beckham Thigpen's days as a Kansas City Chief.

On August 3rd, 2007, the Kansas City Chiefs traveled to Mankato, MN, to scrimmage the Minnesota Vikings, as they had done in previous years.

QB Tyler Thigpen was a part of that scrimmage, on the Vikings side. He was drafted by Minnesota in the 7th round of the 2007 draft, only four months earlier.

There isn't a heck of a lot of news on that scrimmage that I can find now. Thigpen may not have even played. But him and Vikings DE Khreem Smith both caught the eye of Herm Edwards after that scrimmage.

About a month later, as NFL teams were finalizing their rosters, the Minnesota Vikings released Tyler Thigpen and the Chiefs claimed him on waivers on September 2nd, 2007. They were able to do so after releasing QB Casey Printers just a day earlier.

September 2nd came and went with quite a few transactions for KC:

Back in the day, that was a huge day for Chiefs news. And I managed to squeeze a whole three paragraphs out of that! Yeah, I can forgive you guys for not reading AP earlier.
On September 18th, Ridiculous Matt may have coined the nickname Bones for Thigpen, It was related to this rather interesting picture of Thigpen with a skeleton.

The 2007 Season Cameo
Fast forward a few months. Tyler Thigpen hasn't played yet. It's been the Damon Huard v. Brodie Croyle debate that nearly drove us all mad.
It's December 2nd, After beating the Chargers earlier in the year, the Chiefs are getting whomped at home when Damon Huard is sacked and injured with 5:30 left in the game.
Enter Tyler Thigpen. 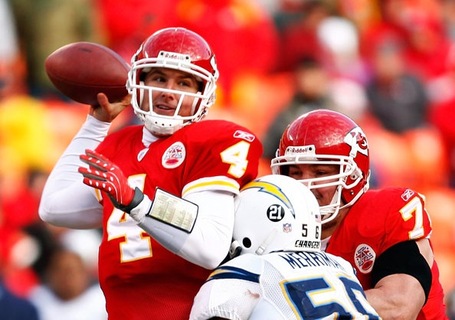 Well, it wasn't exactly a dramatic entrance. Thigpen went 2/6 for 41 yards and threw one INT. For the final four games of the season, the Chiefs used a mix of Brodie Croyle and Damon Huard at QB. Thigpen wouldn't play the rest of the season.

The Rebirth; The Starter

Tyler Thigpen began the 2008 season second on the Chiefs' QB depth chart. He was behind #1 starter Brodie Croyle,

The Chiefs started the season against the New England Patriots and both teams ended up losing their starting QBs for the season. Tom Brady, of course, was injured by Bernard Pollard. Brodie Croyle went down until October with a shoulder injury after a sack by Patriots LB Adalius Thomas.

Damon Huard would finish the game against the Patriots and start the next week against the Raiders.

Huard would make four pass attempts in Week 2 of the 2008 season before getting injured. Tyler Thigpen would replace him, going 14/33 for 151 yards. He added in one TD and one INT as well. Mr. Marques Hagans had one pass attempt as well and then we gladly forgot about the guy.

Turn your eyes to Week 3, as the Chiefs take on the Atlanta Falcons. It's Tyler Thigpen's first game as a starting QB in the NFL. And he was our hopes and dreams because frankly, we didn't have many other quarterbacks on the roster. 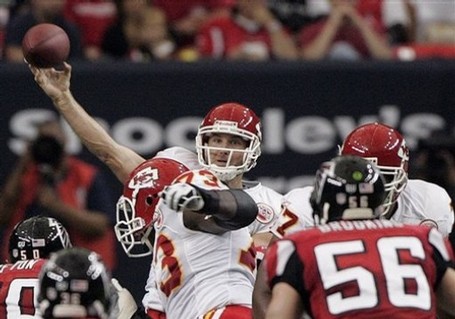 Not a lot of good came out of Tyler Thigpen's first start in the NFL. He was 14/35 for 128 yards passing. He threw one TD and three INTs. He honestly looked scary as an NFL quarterback. After this Atlanta game, I was convinced this guy was a joke.

"The Tyler Thigpen led Chiefs' offense put together, for about 28 minutes to start the game, one of the worst strings of drives I've seen in a long time. And I watched all of last season!"

Oh but I also felt the Thigpen magic early on too:

"With those criticisms aside, Tyler Thigpen did lead touchdown scoring drives of 74 and 82 yards and that's no joke for this current Chiefs team. The best three drives of the season have been with Thigpen at the helm. Even going back further than this year, those two drives yesterday and his 9 play, 80-yard drive last week were some of the best drives the Chiefs have had since 2006.

For that, I will politely tip my hat to Tyler Thigpen and anxiously await the return of Brodie Croyle, or whoever our next quarterback is."

Wow. What insight I had, no?

Damon Huard was back in Week 4 against the Broncos at Arrowhead, which was one of the two Chiefs' wins last season. Thigpen did not play in quite possibly the last happy time that the Kansas City Chiefs have seen.

Next week against the Carolina Panthers was not so happy. A 34-0 route by the Panthers prompted Herm Edwards to replace a shaky Damon Huard with Thigpen.

Thigpen came into the game in the 4th quarter and ran a no-huddle/shotgun combo offense that garnered very few yards.

Bye Week then Another Croyle Injury

The Chiefs had a bye in Week 6 and Brodie Croyle was back from his separated shoulder to start against the Titans in Week 7.

14 plays in the game for Croyle, he was done for the season with a sprained knee. He limped off the field and Damon Huard jogged on. Huard went 9/16 before injuring his hand in a suspiciously minor incident.

Enter the Tyler Thigpen Era for Real This Time

It's still Week 7 against the Titans and after Croyle and Huard went down, Thigpen attempted the Chiefs final 11 passes against the Titans. Thigpen went 5/11 for 76 yards. He also rushed for 21 yards and one TD. 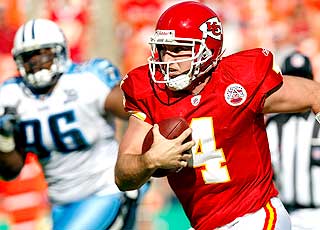 From the Titans game on, the Kansas City Chiefs were Tyler Thigpen's team. He made the team exciting and bearable to watch, despite going 1-10 in his career as a Chief.

Thigpen put together one of his best games ever as a Chief against Brett Favre and the Jets. Thigpen was 25/36 for 280 yards passing. He also added in two passing TDs and 20 yards rushing. 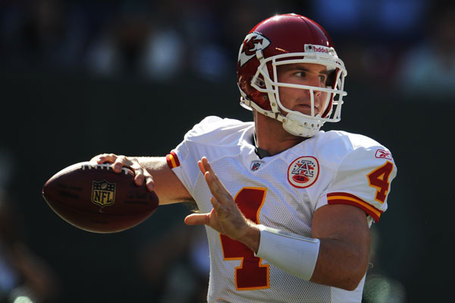 via NFL.com
The Chiefs of course lost the game as the defense completed one its many second half collapses. Here were my thoughts on Thigpen after the Jets game:
"I won't say much about Tyler Thigpen. I've never seen him throw the ball like he did yesterday- with accuracy and power behind his throws. Very few of his passes made me gasp as they have so many times before this season. He played very well, deserves to be the Chiefs starter for the rest of the 2008 season and may end up being a good backup in the NFL. For those ready to anoint him the QBOTF, ahem, let's see if he can (a) win a game and (b) play that well twice in a row. Crazy, I know."
Week 9 Tampa Bay Buccaneers
Thigpen helped take the Chiefs into overtime against a decent Bucs team led by Jeff Garcia. KC lost but it was again the Tyler Thigpen show. The rookie QB was 14/25 passing for 164 yards. He also hit Dwayne Bowe for a TD pass.

And of course, this was the game of "The Catch." 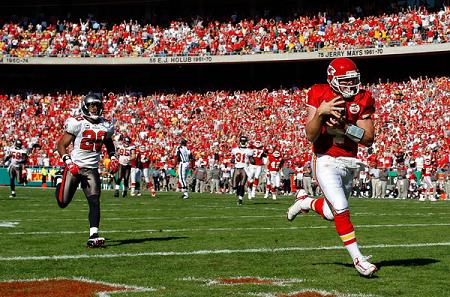 Here's what I had to say after this game:

"I know I'm not the only one surprised with Tyler Thigpen's performance the last two weeks. I thought that those two performances, if Thigpen was even capable of them in the NFL, were years of development down the road.

I love the energy he brought yesterday. I love the TD catch from Mark Bradley. I love his much improved scrambling ability. To date, he's easily the 2008 Chiefs most exciting player."

Again, in arguably his best football game, Tyler Thigpen lost. Thigpen's two point conversion to win the game was batted down in the final seconds of the game, forcing the Chiefs to lose 20 to 19, 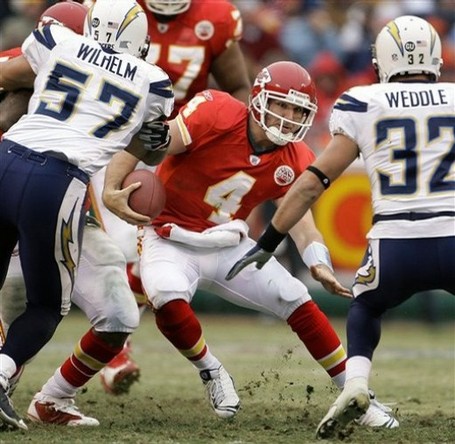 I continued to be astounded by Thigpen:

"Call me crazy, but in a little over a month, I've gone from not believing for one second Tyler Thigpen is an NFL quarterback to contemplating him at a starting role in 2009. Keep up the good work, Thigpen."

Thigpen again put up a gallant performance in a game that many thought was going to be a complete wrought. The Chiefs hung on to only lose by 10 points.

Thigpen was 19/38 for 235 yards and passed for two TDs. Since becoming a starter in Week 8, Thigpen now has 8 passing TDs. 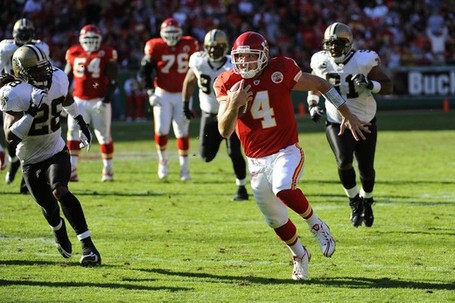 I didn't have much to say on Thigpen after this loss:

In the final six games of the season, the Chiefs and Tyler Thigpen thankfully pulled out one win (against the Raiders no less).

Thigpen continued with his flashes of brilliance and periods of inconsistency. More than anything, he made this brutal final stretch of the 2008 season watchable, in a Dante Hall kick return sort of way. You watched in anticipation that something, anything entertaining and exciting might happen.

And for that, thank you Tyler Thigpen. Your time in Kansas City was brief but you made a last impression on this team's fans.

Here's one final highlight video salute for the former #4.

Goodbye Tyler Thigpen. You will be missed. Good luck to you in Miami. You made this blogger's life a lot easier last year.