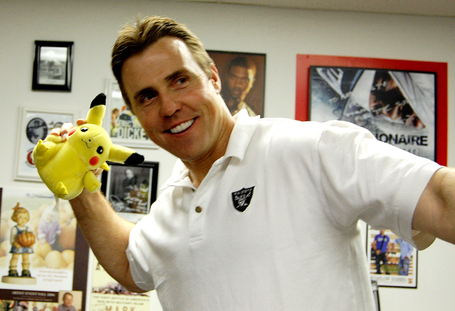 Romanowski played for the Raiders so his ability to manage people is unmatched by any other former player still alive today.   Photo via api.ning.com

As if the AFC West weren't bad enough, former Bronco Bill "Your Face Is About To Meet My Fist" Romanowski recently came out with this goldmine:

"For [Broncos owner] Pat [Bowlen] to do something like this, it would take him being a visionary, thinking outside the box," said Romanowski, whose coaching experience includes helping with his son's football team. "Him hiring me, it's a long shot. I understand that. I know that."

"This may be a complete fantasy and that's all right ... At the end of the day, nothing may happen from it."

He may want the job but he doesn't actually believe he's a better coach than guys that have dedicated their lives to coaching.  Wait, does he think he's the best candidate out there?

"I truly believe that I'd be the best person in the country for the job. That's me being confident in my abilities," Romanowski said.

He included a 7 page Power Point presentation detailing why he should be included in the candidates.

After I read this and got up off the floor and back into my chair from laughing so hard, I thought I could think of plenty of former Chiefs players that are future coaches.  The first one that pops into my mind is Trent Green.

I think making the transition from QB to coach is more seamless than any other position on the field considering how much information you need to pile (and process) into your brain.  Herm is a former defensive back coach and it shows in his drafting/coaching.

What former (or current) Chiefs player is going to be the next coach in the NFL?

For more information on Romanowski's coaching career, check out his blog.