Getting to Know a GM: Ron Hughes

Share All sharing options for: Getting to Know a GM: Ron Hughes 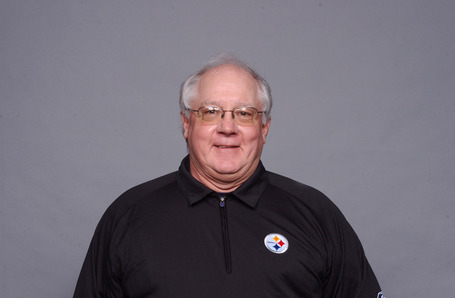 Ron Hughes is the College Scouting Coordinator for the Pittsburgh Steelers. His work with the Steelers helped the team land their 5th Super Bowl victory in the 2005-2006 season. Prior to that, he was with the Lions organization and actually made some solid personnel moves.

Hughes began his career as a scout for BLESTO, a NFL scouting combine service. In 1982 he took a scouting position with the Detroit Lions. Two years later, he would move onto director of pro personnel for the Lions until he finally settled on the title director of player personnel which put him in charge of all college and pro scouting (the Lions later added VP of Player Personnel to his title).

He held that spot for 10 years during a time in which the Lions actually weren't terrible at drafting. Well, to put it more appropriately they were hit or miss (instead of, you know, always missing).

Hughes and the Lions regularly found multiple year starters in the draft. Some of his better picks include:

After 1996, when Hughes was still the director of player personnel, the drafting seemed to fall off. 1997-2000 produced just one player that has started in the league for more than 7 players. The previous 3 drafts had 7 Pro Bowls. The next 3 had 0.

I'm not quite sure what happened but there is a definite drop off there.

Also, don't worry about the fact that he worked for the Lions. I know that place seems infected with ineptitude but other successful guys like Kevin Colbert (Steelers) and Thomas Dimitroff (Falcons) worked there as well.

Hughes' career continued as a draft consultant in Pittsburgh after the Millen regime gave him the boot in 2001. By 2003 he was hired on as the Steelers College Scouting Coordinator.

He was the one that pushed the Steelers into trading with the Chiefs so he could snag S Troy Polamalu (and the Chiefs selected....Larry Johnson). In addition, he scouted 3 year starter Ike Taylor, whom the team selected with a 4th round pick.

Ben Roethlisberger was the big one here. In addition to that, he whiffed on 2nd rounder Ricardo Colclough (name sound familiar) but made a solid pick in 3rd round tackle Max Starks.

Heath Miller in the 1st round appears to be a solid selection. Chris Kemoeatu, a guard, was selected in the 6th round and sees action.

A starting WR and a G (on a very, very questionable line).

I must say that his resume does underwhelm me. The Steelers organization has an outstanding system that would likely flourish with or without Hughes. Is it the employee (Hughes) or the system (Pittsburgh)?

One thing he has going for him is that he works for an organization that is deeply admired by our owner. On the flip side, he's also much older than our owner and doesn't necessarily mean he's a "fresh face".

Does he fit Clark Hunt's criteria for a GM?