Share All sharing options for: 2008 Faces of Herm Edwards

Whether or not you're critical of the job Herm Edwards has done as the Kansas City Chiefs head coach, I'm sure we can all laugh at him, right?

Of course we can. Here are the Faces of Herm Edwards from 2008. 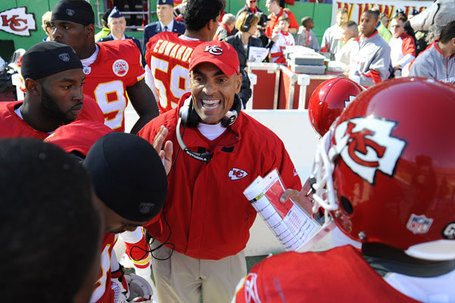 Despite his reputation as a player's coach, nobody seems to be listening to Herm in this picture, which is why it's titled like it is.

This face is most often used when Herm is dealing with rookies during games. He likes telling them during games that they're "growing up" and for the offense to get the ball to players who "make plays."

The Confused at the Scoreboard  Face 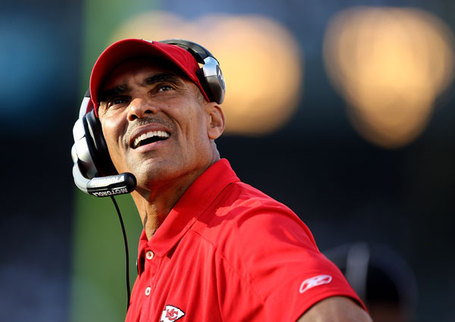 This is the all-time best Herm Edwards face. There are countless pictures just like this one of Herm looking confused:

"Wait, you only get three timeouts?"

"That was a quick two touchdowns."

"There isn't a mercy rule in the NFL?"

This face is generally seen when the defense "does a pretty good job" or when the opposing team "gets a hot hand and makes a lot of plays."

The "I can't believe you just did that" Face 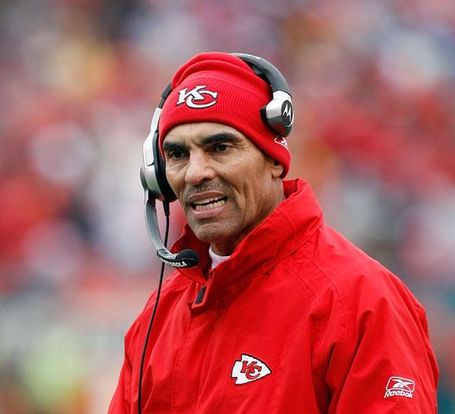 Rarely is Herm genuinely disappointed during a game and this is the face he shows when it happens.

This face is most often seen when the Chiefs have "dropped balls that could have maybe kept the drive going." Or when the Chiefs gave "too good of an offense" too short a field. Or when a Chiefs' opponent "makes plays at the end to win the game."

This face is also a response to referees when they tell him he's out of timeouts. 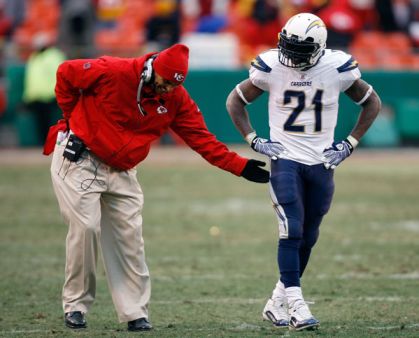 Another Herm classic. You can almost always catch Herm joking around with his own team or players on other teams. He likes getting close, slapping butts and smiling a lot when he's in this mood.

In this mood, he frequently tells his players to "just play, not worry about doing everything right or the score."

This is strictly a training camp, pre-game face of Herm's. He never smiles during games. At least not in the last two seasons. 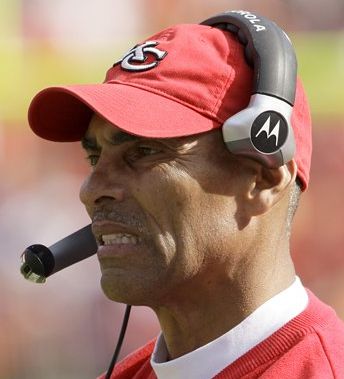 Another rare look for the always positive Edwards. You see this face when the Chiefs get destroyed at home (by the Bills), give up 300 rushing yards (against the Titans and Raiders) or forget to play defense for an entire season (2008).

We probably needed to see more of this face last season and this season.

All photos courtesy of NFL.com.