Getting to Know a GM: Jimmy Raye

Share All sharing options for: Getting to Know a GM: Jimmy Raye 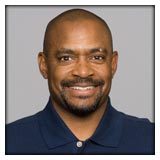 Jimmy Raye III (No, not that Jimmy Raye) is the son of former Chiefs offensive coordinator and current Jets running backs coach Jimmy Raye II. The Chargers Director of Pro Personnel, Raye has been with the organization in some capacity since 1996 according to the team bio. At age 40, he's already experienced and provides a fresh face to any GM job in the NFL.

Per Adam Schefter of the NFL Network, Raye is perceived to be a candidate for the GM job in Kansas City.

He graduated from high school in 1986 and promptly went to San Diego State (Herm's alma mater) as a wide receiver. After graduating, he spent the 1991 season on the Los Angeles Rams roster seeing hardly any action.

In 1992 and 1993 he attended training camp for the Chargers and Oilers before heading back to his former high school to coach the wide receivers. After one year there, he worked a short time for the Amsterdam Admirals in the World League.

Though his athletic talent may not have been enough to sustain a long NFL playing career, his off the field attributes landed him a job with the Chiefs for the 1995 season. His official title was an assistant offensive quality control coach.

The next summer, he signed on with the Chargers as a scout, a position he held until 2000 when he was promoted to Director of College Scouting.

Yep...the Director of College Scouting a/k/a GM in waiting. These are the guys that run the draft. Though he doesn't have final say (GM A.J. Smith did/does in San Diego), he's an integral component of the Chargers ridiculous drafting success. Since Raye took over this post in June of 2000 (after the April draft), let's take a look at his drafts from 2001-2006 to evaluate his success (or lack thereof).

5 players that have started full time for at least one year in the NFL. Quentin Jammer, 1st round pick, was the prize of this draft.

A pair of 2nd round picks, Drayton Florence and Terrence Kiel, are starting material in the NFL. 2 others are contributors while a 5th, Mike Scifres, is the current punter. 6th round pick Hanik Milligan isn't a starter but reached the Pro Bowl as a special teams guy.

This is where the fun starts. If you all remember, San Diego held the #1 overall pick here and appeared intent on selecting Eli Manning. However, Eli's hissy fit (or marketing ploy to be in a larger media market) caused GM A.J. Smith to deal him for Philip Rivers, a 2004 3rd round pick (Nate Kaeding), and a 2005 1st (Shawne Merriman) and 5th round pick (traded for Roman Oben).

The credit goes to A.J. Smith for triggering the trade but the credit for the 3 Pro Bowlers selected is shared with Raye.

The fun continues here as Raye and Co. again found 3 starters and 1 key reserve. 2 first round picks, Shawne Merriman (3 Pro Bowls) and Luis Castillo are full time starters. Vincent Jackson, 2nd round pick, is a full time starter. A fourth, Darren Sproles, is about as big of a reserve player you can have as evidenced by his ridiculous stat line from Saturday night.

2 more players, 2 more Pro Bowlers. Antonio Cromartie was a 1st rounder here and is arguably the top corner in the game today. A 2nd rounder, Marcus McNeil, went to the Pro Bowl his rookie year as a left tackle.

Raye's track record is outstanding. The Chargers have built a mini-dynasty in the AFC West because of their drafting abilities and Raye is a huge part of that success.

In April of 2008 he was promoted to the Director of Pro Personnel after assistant GM Buddy Nix left the organization. Most of the Chargers' drafts were ultimately headed by Smith and assisted by Nix. In addition, there were 8 college scouts, headed by Raye.

What makes him good at his job?

Experience. His father has been in the league since he was a kid so he's seen it all.

"From someone that grew up in the game, to being a ball boy, a player, a scout and a quality control coach, I don’t think there are that many people that have that broad of a background," Raye said. "I see it from a lot of different angles. You almost learn through osmosis. I feel like I have some advantages because I have practically been evaluating players my whole life."

Does he fit Clark Hunt's criteria for a GM?

Why won't he be the next GM in Kansas City?

First, he's coming from a division rival which makes things a little hairy. Though the Chargers can't completely block him from being hired by the Chiefs, they can make the decision for Raye a hard one by offering him more money and/or power.

Second, he's not technically from outside the organization. He spent time in Kansas City, albeit for just one year and under a completely different regime. I don't foresee this precluding him from the search as his track record in San Diego speaks for itself.

Despite these reasons, Jimmy Raye's past history of success indicates he would be a great candidate for GM of the Kansas City Chiefs.