Which Head Coach Would Scott Pioli Bring with Him to the Chiefs?

Share All sharing options for: Which Head Coach Would Scott Pioli Bring with Him to the Chiefs? 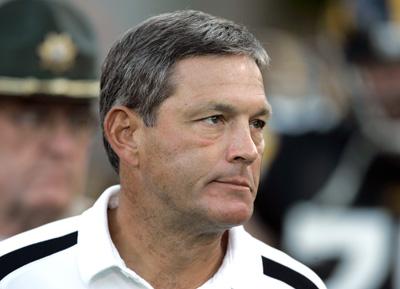 Remember that Scott Pioli is reportedly interviewing with the Chiefs today...

As the momentum shifts from the Cleveland Browns to the Kansas City Chiefs in the race to hire New England Patriots Vice President of Personnel Scott Pioli, let's take a look at one of Pioli's perceived demands- his pick of the team's head coach.

Those "league sources" are at it again with this one. According to those sources, if Scott Pioli does indeed accept a front office position with a team, he would reportedly want either Iowa head coach Kirk Ferentz or Patriots offensive coordinator Josh McDaniels to accompany him as the head coach.

Pioli has this luxury. He doesn't have to leave New England and he has virtually all of the leverage in any negotiations. Money, control...it's all his for the taking should he choose to accept a position somewhere else.

So...Kirk Ferentz or Josh McDaniels? Let's learn more about who could quite easily be the Kansas City Chiefs head coach in 2009.

What's the connection between Scott Pioli and Kirk Ferentz?

Ferentz and Pioli both worked under Browns headh coach Bill Belichick in the mid 1990s. Ferentz was the offensive line coach there from 1993 to 1995 while Scott Pioli was a scout for the Browns.

Both men moved with the franchise to Baltimore, with Pioli becoming the Ravens pro personnel coordinator and eventual director while Ferentz remained the offensive line coach.

Ferentz has been in a similar position as Pioli the last few years. Whenever head coaching vacancies have come up in the NFL, Ferentz's named has managed to get mentioned in connection, much like Pioli and any GM opening. They're both "in waiting" for the right job it appears.

Ferentz's ten years as head coach of the Iowa Hawkeyes looks like a bell curve. Ferentz had a couple of sub .500 seasons when he started; took the Hawkeyes to some big bowls in the early 2000s; and now has dropped to the lower reaches of the Big 10 conference.

It's appropriate Ferentz is a college coach because we've got a college team in Kansas City right now.

What makes Ferentz one of Pioli's top choices for head coach? Like I mentioned above, the two have worked together before and Ferentz's son Brian worked in the Patriots personnel department this past season. As we've seen before, filling these vacancies often comes down to who you know.

Since workplace nepotism can't be the only reason to hire Ferentz (Right?), what are his football accomplishments?

We'll stick with the last ten years at Iowa for now. You take a look at Iowa's win/loss record over the last ten years and it's not blowing me away. The Hawkeyes are 28-22 in their last four seasons and finished no better than tied for third in the Big 10 during that time.

Ferentz is coaching in a conference that is stacked almost totally against Iowa. Ohio St. Michigan and Penn. St. are recruiting the same players as Iowa. For Ferentz to accomplish even the little he has at Iowa, I consider that a big victory.

Kirk Ferentz is an interesting pick as an NFL head coach and if Scott Pioli does bring him in, I'm willing to trust the talent guru Pioli.

More to read on Ferentz:

The McDaniels-Pioli link is much easier to explain than the Ferentz link. McDaniels is the offensive coordinator and quarterbacks coach for the New England Patriots. He came to New England in 2001 as a scout; moved to defensive assistant; then to QB coach; and now he is the OC and the QB coach.

I won't spend much time touting McDaniels' accomplishments. You'd have to be completely new to the NFL right now to have missed the offensive accomplishments of the Patriots and QB Tom Brady.

McDaniels not only has great talent in New England, he's also had to work a high number of free agents into the offense and has done it well. Think about the Patriots and their ability to maximize the offensive impact of has-beens, throwaways and over the hill veterans. Then think of Josh McDaniels. That's his work. To me, that expresses intelligence, the ability to be flexible and game plan for opponents. Not things our current coaching staff is known for.

McDaniels is experienced with a winning team and a winning culture; knows Scott Pioli well and has worked with him for a long time; has been continually touted for the last few years as the next up and coming head coach in the NFL; and has worked with both offense and defense in his career.

McDaniels would be a great replacement to Herm Edwards if Scott Pioli is hired by the Kansas City Chiefs.

Who is Josh McDaniels?