Derrick Thomas is in the Hall of Fame

Share All sharing options for: Derrick Thomas is in the Hall of Fame 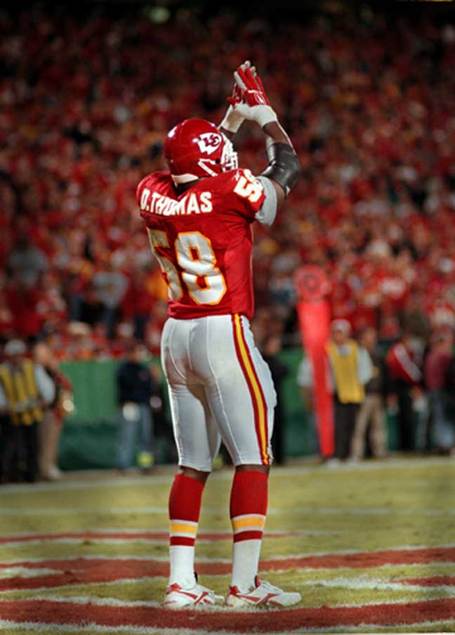 Just heard it on ESPN.

NFL.com has a break down of all his achievements.

Thomas amassed more sacks during the 1990s than any other player. He was selected to nine Pro Bowls, named All-NFL three times, and was All-AFC seven times in an eight-year stretch.

He helped define the art of the sack and strip of the quarterback. Thomas had 126 1/2 sacks, which ranked ninth in NFL history at the time of his death. He set the NFL single-game record with seven sacks against Seattle in 1990; and he nearly matched it, recording six sacks against Oakland in 1998, giving him two of the top three sack days in league history.

Clark Hunt on the Chiefs newest Hall of Famer:

"This is an exciting day for Chiefs fans across the country and an exciting day for our family," Chiefs Chairman Clark Hunt said. "Derrick Thomas was a cornerstone of the modern era of the Chiefs, and one of the most feared pass rushers of his generation. We are thrilled with his selection to the Pro Football Hall of Fame Class of 2009.

"His outstanding statistics and play on the field made him deserving of pro football’s highest individual honor, but – just as importantly – he was a hall of famer in the Kansas City community. Derrick’s legacy of community involvement is among the finest for any player in Chiefs history, and he will be remembered for contributions like the Third and Long Foundation and his work to help others long after his induction ceremony."

His signature play, appropriately for a community that claims the world's greatest barbecue, took its name from a cut of meat.

Charging around a hapless blocker, he would attack from the quarterback's blind side. As the crowd caught its breath, he'd reach out and chop at the passer's hand, knocking the ball loose in what fans dubbed the Kansas City strip.

Shannon Sharpe deserves it but so did DT:

He was the only new Hall of Famer to spend the majority of his career in the AFC West. Denver tight end Shannon Sharpe, who was a finalist in his first year of eligibility, did not get elected. This week, Sharpe said Thomas was the best outside linebacker he ever faced.

The on-field arguments for Thomas have been hashed over again and again. The off-field arguments against him don't hold any water, in my book. To me, Thomas was a no-doubt Hall-of-Famer. Who, besides his contemporary, Lawrence Taylor, was a bigger pain in the rear to opposing offenses? As someone who grew up rooting against the Chiefs, I can think of no one. He was an admirable villain for Broncos fans, a worthy opponent in every sense of the word.

H/T KC4Life in the FanPosts and Seth_C in the FanShots.