Ah yes. The NFL playoffs. My favorite sports time of the year, tied with the NCAA basketball tournament.

The games begin today with the Atlanta Falcons traveling to Arizona to play the Cardinals at 3:30 PM central and the Indianapolis Colts taking on the San Diego Chargers at 7 PM central time. Peyton Manning, this year's NFL MVP, takes on the quarterback who won the passing title, Philip Rivers.

A couple of notes from our SBN NFL team blogs.

Stampede Blue is talking about Peyton Manning, of course:

When all is said and done, this award (along with the other awards and accolades Peyton has built up over the years) will continue to cement Peyton's legacy as arguably the greatest QB to ever play the game. Sure, there will always be some doubters and some haters. But, with Peyton winning his third MVP, these sad, silly little fools are now more easily brushed aside. With every new thing Peyton wins, more and more Peyton haters are tossed into the fires of irrelevancy year after year. 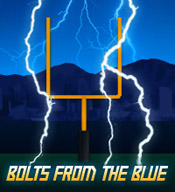 Bolts from the Blue breaks down the matchups:

The Colts running game has faltered badly this year; they are rushing only 80 yards per game good for 31st in the league. Joseph Addai and Dominic Rhodes split the carries, but with Jamal Williams clogging up the middle for the Chargers I wouldn't be surprised to see a lot of nickel coverage. When the Chargers played them earlier in the season the Colts were much more successful throwing, even for short yardage situations.

Behind the Steel Curtain, SBN's Steelers blog, is checking in on this game to see who they'll play next week. They're talking about matchups over there as well.

Tony Dungy's Colts have mastered the chess match of the game. It's rare you see a team with such an ineffective running game (79.6 yards per game, 31st in the NFL) have such a high rate of success on third down (50 percent, 1st in the NFL). League MVP Peyton Manning is a huge part of that, so much so he's taken arguably the least talented Colts team in its current run of dominance and made it the latest trendy lower-seeded choice for the conference championship.

Next, first actually, we have the Atlanta Falcons at the Arizona Cardinals, which is a game that makes me smile at the parity in the NFL. This game starts at 3:30 central time.

From Revenge of the Birds:

The offense, and more specifically the passing offense, has been the breadwinner of the Arizona Cardinals this season and this Saturday should be no different. It's probably safe, and fair, to assume that the running game isn't going to explode for Boldin13_medium150 yards and the defense isn't going to pitch a shutout. Knowing that leads us to the next obvious assumption, the Cardinals chances of advancing rest squarely on the right shoulder of #13.

This is it, friends. Time to treat every game like it's the contest that decides the fate of the human race. Time to cheer, to drink, to yell like tomorrow is the most nebulous promise of your future. You never really know when we'll be back here again, so let's hope the Falcons come out of this game with tufts of red feathers sticking out of their helmets.

Now is the time to discuss every possible angle for the game. Will the Falcons effectively bottle up the Cardinals' passing game? Will Michael Turner get untracked and run for hundreds of yards? Will these questions lead to meaningful discussion?

And with that, I'm taking the Colts and the Falcons.