Derrick Johnson's Future with the Chiefs

Share All sharing options for: Derrick Johnson's Future with the Chiefs 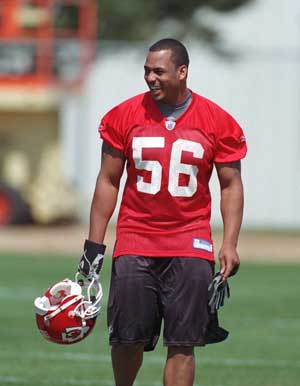 When Derrick Johnson fell to the Chiefs in the 2005 NFL Draft I nearly fell out of my chair.  His NCAA accolades were mesmerizing.  His speed thrilled me.  His 9 forced fumbles his final year at Texas were an NCAA record.

Here's a little more about him coming out of Texas:

Derrick Johnson is the top-ranked linebacker in the draft, with the hardware to support such standing. Johnson's haul included the Bronko Nagurski Trophy as the nation's top defensive player, The Butkus Award as the nation's top linebacker and the Big 12 Defensive Player of the Year award. After setting an NCAA record with nine forced fumbles in 2004, he became the first Texas defender since Tommy Nobis to earn first-team All-America honors.

Can't miss prospect, right?  Well, not so much.

Those that claim he's a bust aren't necessarily saying he's a bad player.  Because he's not.  He's been average to above average his entire career (72 tackles and 3 sacks per year average).  But for the 15th pick in the draft, you're looking for a Jonathan Vilma (12th overall pick in 2004) or a DeMarcus Ware (11th overall in 2005).  Though those players line up in different positions within the linebacker position group, both have made a bigger impact for their respective teams than Johnson (and both made the Pro Bowl their second year).

Johnson is entering the final year of his rookie contract.  What's next for DJ?

I'm not a fan of this move.  He's demonstrated an ability to play competently even though the flashes of the Texas Derrick Johnson don't appear frequently.  He has some value on the trade market, but realistically this wouldn't be worth it.

For some perspective, Jonathan Vilma (drafted 1 year earlier), was traded to the Saints for a conditional 4th round pick that could escalate to a 2nd round pick if he hit certain incentives*.  Vilma's position, middle linebacker, has a higher value than Johnson's, strongside linebacker (although he played weakside at Texas and has generally looked better on that side).

*Vilma also lost value because the Jets switched from a 4-3 to a 3-4 when Eric Mangini arrived.  He lost a ton of playing time in his last year with the Jets and most teams knew he would be traded which decreased his value.

So, Derrick Johnson has done less statistically and plays a position on the linebacking corps with less value than Vilma, who was traded for a conditional 4th rounder.  With this comparison, I would place Johnson's value in the same ballpark, but probably closer a true 4th round pick (without realistically achievable incentives that could push it higher).

Does anyone think we can find a player with a similar production value to Johnson in the 4th round of the draft?  Not me.

With a projected $45 million in cap room in 2009, the Chiefs will have the option of re-signing Johnson to a long term deal this coming season.  With a base salary of $1.5 million in the final year of his deal and a looming cap-less year in 2010, the Chiefs can throw plenty of guaranteed money at him in 2009 that will keep him around for a few years but at a discounted rate on the final years of the deal.

Another caveat to this whole contract situation is a change in the Collective Bargaining Agreement in the event of a cap-less 2010 season.  Previously, a player had to accrue 4 years of service to become an unrestricted free agent.  However, a cap-less year would turn that number to 6 years meaning he would be a restricted free agent (Translation: teams would be able to match the contract offer sheet we gave him but would in turn give up draft picks to the Chiefs for the right to sign him).

This isn't an appealing scenario because you always want to get value for a player if he's just going to be around for one more season.  I don't see this situation popping up with the Chiefs.  He's certainly a serviceable player who has a role with the Chiefs.

Should He Stay Or Should He Go?

Derrick Johnson should stay with the Chiefs.  While he may not have lived up to the billing that was bestowed upon him as a 1st round pick, he's still a decent player albeit with a ceiling that seems to be diminishing each season.

The question really comes down to: What player or what draft pick is a better option than Derrick Johnson at this point? Currently, the Chiefs have no better option.