The Case for Chan Gailey as the Chiefs Head Coach

Share All sharing options for: The Case for Chan Gailey as the Chiefs Head Coach 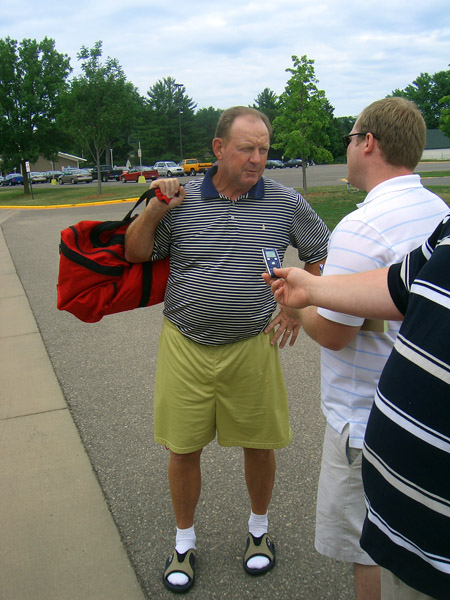 Don't judge Chan's head coaching ability on the fashion faux pas that is socks with sandals.

Chan Gailey should be given serious consideration for the Chiefs head coaching job. The turnaround job he did with the Chiefs offense in 2008 is indicative of his ability to turn nothin' into somethin' (eloquent, right?). His time as an offensive coordinator for the Pittsburgh Steelers and Miami Dolphins combined with an underrated tenure in Dallas as a head coach make him an interesting candidate to be the Chiefs next head coach.

Previous Success as an Offensive Coordinator

Gailey spent two seasons as the Pittsburgh Steelers offensive coordinator improving the team from an 11th ranked offense in his first year (1996) to a 7th ranked offense the next. In comparison, the next three seasons without Gailey saw their offensive rank dip to 28th, 17th and 17th.

Clark Hunt is an advocate for anything and everything Steelers. He admires the organization because of their continued success and respects the knowledge those having worked in Pittsburgh possess. His work there helped produce 44 wins over 4 years. I'm not suggesting that 11 win average is a direct result of his employment, but seeing a successful program first hand certainly doesn't hurt his chances for future success.

From 2000-2001 Gailey served as the Miami Dolphins offensive coordinator. His first season saw a middle of the road offense that ranked 16th in the NFL. The following season the team improved to the 8th ranked offense. Both seasons the Dolphins posted 11-5 records.

Like Pittsburgh, Gailey stuck around for 2 seasons and saw improvement in offensive statistical rankings.

Previous Success as a Head Coach

Gailey's success as a head coach has largely been forgotten or underrated. He spent 2 years manning the Dallas Cowboys until Jerry Jones prematurely fired him.

"I regret just giving Chan [Gailey] two years," said Jones, the Cowboys' owner and general manager. "When you really look at what he's done since he's left here and look at what he had done here – he took us to the playoffs twice. And I'm not talking about the fairness of it. I'm just talking about how I should have worked hard on some things where we could've made adjustments that were meaningful."

So, Jerry Jones, a guy willing to do whatever it takes to succeed, admits he made a mistake in firing Chan Gailey after just two seasons.

And why does Jones regret that move? Because Gailey's teams reached the playoffs both years, winning the NFC East with a 10-6 record in 1998. His two year stint left him with a head coaching record 4 games above .500.

Gailey, in an organization that was on the verge of overhauling its identity from the days of the triplets (Troy Aikman and Michael Irvin were nearing the end of their careers while Emmitt Smith was nearing the end of his productive years), demonstrated an ability to competently play the hand that was given to him. And play it well, mind you.

In contrast, Dave Campo took over after Gailey was dismissed and brought the team just 15 wins in 3 years, 3 less than Gailey's total in 2 years.

Somebody Get Him a Quarterback

What do these names have in common?

All quarterbacks Gailey had to work with. And work he did compiling impressive offensive numbers despite an obvious handicap at the most important position in all of professional sports.

Gailey's known for his unorthodox play calling as an offensive coordinator. But this line from a 1999 article comparing Norv Turner and Chan Gailey's offensive systems speaks volumes about his ability as a head coach.

Turner dares you to stop him. Gailey challenges you to outthink him.

This is a key point, especially when applied to today's NFL. It's rare that players will have a major athletic advantage over another. In the NFL, everyone is athletic, everyone is strong, everyone is fast, etc. Gailey is cognizant of this and tries to beat opponents by out-thinking them.

Right now, what other options do the Buffalo Bills really have? Russ Grimm has turned them down for an interview. The fact that Chan Gailey, someone who hasn't been a head coach in over a decade, is even being considered means the Bills are scraping the bottom of the barrel.