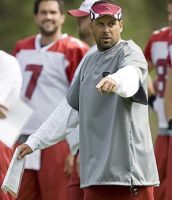 For a good portion of the Super Bowl festtivities, the media and the players have quite a bit of free time ask each other questions, hold press conferences and of course speculate on the future of everyone involved in the game.

Lots of that speculation has been centered on Arizona Cardinals offensive coordinator Todd Haley, who, in case you've been living under a rock for the last few weeks, is a strong (rumored) contended for the Kansas City Chiefs now open head coaching position.

Haley addressed that speculation to the media yesterday in Tampa and in my opninion, they ran right down the line of a guy who wants to accept a job offer.

First, pay deference to the man who will hire you.

"Scott [Pioli] and I were kind of young guys in the business at the time we were together in New York, I think highly of Scott; I think he's done a terrific job, he did a terrific job in New England. I think they have the blueprint on how to work together and succeed."

Nice reference to future success Mr. Haley. We all know you begin with a blueprint, which would fit well with, you know, a new head coach to start off with too.

Then, a prospective head coach at the Super Bowl has to pay deference to his team and throw out that line about only concentrating on the big game.

"I love living in Arizona. I love my boss, I love the guys I work with. The guys I coach, I can't say enough about. I'm happy with the job I've done - I feel like I've excelled - and I'm happy to be in the Super Bowl. It's what we sacrifice so much of our lives [for], and as coaches, we truly sacrifice. I have five kids, and I have to sacrifice a lot of time with them . . . I'm just really trying to enjoy this moment."

Allow me to speculate on these few comments here. If Haley was truly planning on staying in Arizona, I think he would have said something like "I'm happy with the job I'm doing", not the job he's done. The past tense would appear to be indicative of a job that he feels is completed, or at least nearing completion.

(Actually scratch that last line. "Have done" is actually the present perfect tense, which completely screws up my speculation. Wow this rumor stuff is making my head spin.)

Now we come to the real zingers. Haley was asked about being a head coach and if you're a Chiefs fan who likes Todd Haley, I think you're going to like these comments.

"I don't know that you can say everybody wants to be a head coach. I didn't get into this business to be a head coach. As you move further along and you move up the ladder, I think it's something you start to think about - 'Could I do this job? Could I not do this job?' I have great confidence in my ability, and if the right situation presents itself, I think I'd like to do that."

I forgot to mention that last line is the key- the 'ole "right situation presents itself" line.

Haley's comments are full of cliche' coaching comments from a guy who is looking to get promoted. The rumor mill has churned and churned and only Todd Haley remains as a viable candidate for the Chiefs. My money says Toddy Haley is the next Chiefs head coach. But the usual caveats apply: we actually know nothing; we've been speculating on anyone and everyone anyway; again, we know nothing.

Now AP readers, in all of the speculative wisdom you've gained in the last month and a half, is Todd Haley coming to Kansas City to coach the Chiefs?