Share All sharing options for: Odds on Derrick Thomas' Hall of Fame Bid 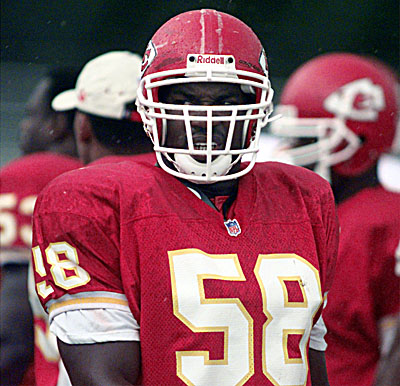 Peter King of Sports Illustrated handed out odds of a handful of prospective Hall of Fame candidates in this morning's Monday Morning Quarterback.

Where did he place the odds on the Chiefs' late Derrick Thomas to gain entry into the Hall of Fame? 2:1. Per MMQB:

I felt the tide turning in the room last year for Thomas, and I thought he might make it after selectors heard the presentation for him. I think if voters believe he was even a satisfactory player against the run, he'll get in this time.

With one pass rusher a shoo-in (Bruce Smith), King speculated that one more pass rusher will garner the necessary votes for inclusion into the Hall. If King's speculation is correct, Thomas' biggest impediment is former Bears defensive end Richard Dent.

Dent, like Thomas, is gaining momentum, and I think at least one pass-rusher other than Smith will make it this year. I think it'll probably come down to Thomas or Dent.

Although it might turn out to be a pointless exercise, let's take a look at how each player stacks up statistically.

The point that seems to be brought up every year is the lack of a Super Bowl for Thomas. In 4 more seasons (which would match him to the 15 years Dent played), DT surely would have passed his competition in sacks and tackles but the Hall of Fame doesn't care about that.

Derrick Thomas was more consistent (1 year with less than 15 games played compared to 4 for Dent) over a longer period of time (9 Pro Bowls to 4 Pro Bowls) than Dent but, dang it, he never got that Super Bowl.