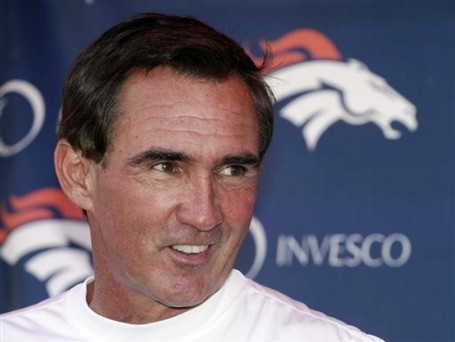 Not that we didn't already know, but Adam Schefter confirmed his report that Mike Shanahan wasn't a candidate to replace Herm Edwards in Kansas City when the former Denver coach reportedly 'laughed' at rumors that he was close to landing in Kansas City.

Apparently Shanahan had turned off his cell phone while playing a round of golf on Friday afternoon when Edwards was fired and Chris Mortensen of ESPN reported the Chiefs were nearing a deal with him to be the next Chiefs coach.

Shanahan quickly found out the fuss he indirectly and unknowingly had created. When he walked off the golf course and into the clubhouse after playing 18, multiple golfers asked Shanahan if it were true he was closing in on a deal with the Chiefs.

Shanahan laughed. He had heard the rumors since Thursday morning, when members of his former coaching staff began calling to ask him if it were true that he was going to Kansas City.

And with that, Chris Mortensen lost pretty much all credibility with the Kansas City Chiefs.