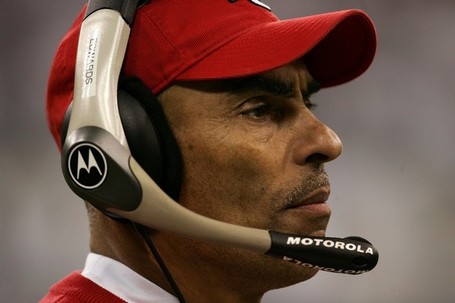 It wouldn't be appropriate if we didn't talk about at least some of Herm Edwards' best lines from his time with the Kansas City Chiefs. From the funny to the confusing to the depressing, Herm hit all of the notes when he was in KC. I've put together some quotes from 2006 and 2007. We'll save the 2008 zingers for tomorrow.

Click on some of those links and reminisce about Herm's press conferences. Actually, if you read only one or two of them, the rest only change slightly. KC never got a "Play to win the game" moment from Herm and I suspect most people attended his press conferences with the anticipation that something like that may happen again. It's probably the only thing that got these writers and reporters through three seasons of generalities, cliches and bland answers.

In Herm's first press conference as the Chiefs head coach, he said "obviously" 13 times. Little did we know that thousands more "obviouslys" would follow. Remember this line when Herm came on?

Right off the bat, Herm was talking about younger players. From the 2006 pre-draft press conference:

I’m a firm believer that when you draft players you don’t wait until their third or fourth year to let them play. If you draft the right type of guy, you have to coach him and get him ready to play early. I don’t have a problem playing young players; I did it in New York. I did it in Tampa. I did it here with Dale (Carter, as defensive backs coach).

Sometimes, Herm said things that just made you shake your head. You knew what he meant but still. This is after that December 2006 31-28 loss to the Browns.

We scored enough points in my estimation to win the game.

Except you didn't Herm. The Browns scored more points than the Chiefs did.

In the second to last week of the 2006 season as the final pieces of the puzzle were falling in place for the Chiefs to make the playoffs, Herm was asked if he pays attention to the scores of other current games.

The only score I look at is ours. I don’t scoreboard read.

From that same press conference, we see a Herm Edwards that is, um, actually sounding like he's accountable. On how feels being on the outside looking in of the playoffs (which the Chiefs made that next week):

Yeah, I’m disappointed. Sure I am. I’m very disappointed. I didn’t come here just to win some games. I came here to win a division and to win a championship. We’ve fallen short right now unless we get in.

The post-2006 season wrap up gave us this funny exchange between Herm and a local sports talk radio guy:

Herm: "Your mom and dad gave you a real name. It ain’t DA. Your name is Damon. It’s a nice name."

During the rookie mini-camp in May 2007, Herm described a Dwayne Bowe injury like this:

He actually got what you call – or what I tell my daughters is — a boo-boo. He has a little boo boo. He’ll be fine.

Here's another rare time that Herm takes the blame. Sort of anyway. From June 2007, on if the Chiefs need to alter their offense from the 2006 version:

You’re daggone right. That’s exactly right. I’ll take the hit for last year too because I changed it a whole lot. It’s changed some and it’s changed to accommodate our players. That’s what you fail to realize. You can draw these things up on paper and say this really looks good. But you have to evaluate your football team as we did last year and say there are some things we need to differently to protect and enhance what our players can do. It’s a good thing and change makes you grow.

Remember training camp 2007 when it was all about competition?

You guys should figure that out and let me know who you would like me to start. I just like competition period. It puts players in a proper frame of mind. I don’t like players getting complacent.

The first game of the 2007 season, a loss to the Houston Texans, gave us the generic Herm post-game response.

It’s very simple and not very hard to figure out: when you turn the ball over four times on the road that’s not good. When they score on turnovers that’s not very good. We had a good drive offensively, I thought, the first time we got the ball. Went down but didn’t get any points. From there we kinda battled field position in the first half. I thought we collected ourselves when we turned the ball over on the kickoff and held them to a field goal. We stayed in the game that way.

On the media hype about Brett Favre as the Chiefs prepared to play the Packers in Week 9 of the '07 season:

I don’t know what to tell you. It's like great groups. They’ve got the one guy’s name and they’ve got ten guys singing in the group. It’s one guy they keep talking about. It’s like Eddie Kendricks and the Temptations.