Yes! Something other than head coach speculation. Thanks DJ.  -Chris

At this point I frankly don't care who our next head coach is.  I'm bored with waiting to find out and am ready to move on.  In the long run, it matters less who is yelling from the sidelines than who is playing on the field anyway. 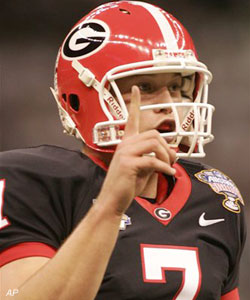 This is Matthew Stafford.  The Kansas City Chiefs should seriously consider drafting him with the #3 overall pick in the 2009 NFL Draft.

Stafford began starting as a true freshman and has 3 years of experience as a starter at the University of Georgia. He has entered the draft as a Junior.

Strengths:
Shows compact and efficient delivery, enabling him to get rid of the ball quickly. Strides into throws and shows rocket arm to make all NFL throws with excellent velocity. Is accurate, hitting 15-plus-yard throws on the money and with great zip. Stands strong in the pocket; does not panic or rush throws when pressured from the blind side. Moves well in the pocket to avoid pressure, and resets feet to get rid of balls quickly and accurately.

Shows quick footwork and athleticism to outrun pass rushers; gets outside the pocket and either scrambles for first downs or makes good throws on the move.

Reads defenses quickly and correctly; identifies blitzes and schemes, and knows where open receivers will be. Is a vocal leader who takes command of his team.

Weaknesses:
Occasionally throws balls up for grabs when pressured up the middle. Some question his inability to lead Georgia to wins in games over elite teams.

Bottom line:
We didn’t want to like Stafford as much as we do, because so many quarterback prospects who have garnered national attention since high school fail to live up to the hype.

However, Stafford is so naturally gifted, we couldn’t help it. A team captain as a junior this season, he has led the Bulldogs through tense situations to success. He has learned well from good coaching and shows excellent technique and recognition skills. Stafford has the talent and intangibles to be an elite NFL quarterback, and if he declares for the 2009 draft, he projects as a top pick.

WHY THE LIONS WILL NOT DRAFT STAFFORD AT #1
Reason #1 - The Economy
The Lions are owned by the Fords and the auto industry is in the toilet and not looking to come out anytime soon.  Add to that the Lions have been a horrible team for decades and are coming off an 0-16 season.  Fans aren't exactly clamouring to buy tickets anyway, even if they weren't suffering from their own financial difficulties.  All this adds up to the Lions ownership not wanting to break the bank if they don't have to and there's nothing more expensive than a QB picked #1 overall.

Reason #2 - The Past
The Lions have been a joke when it comes to the draft for a long time drafting the sexy pick (often WRs) rather than players that could actually help them win.  Though I see no reason why the guys running their front office now are any smarter (after all, they contributed to the 0-16 team as well), they will at least try to convince everyone they are.  That's why the Lions will follow the pattern set by the Miami Dolphins and draft an Offensive Tackle with the #1 pick.  This will serve three purposes:
1) They hope it will fool everyone into believe the new managment is as smart as Parcells because they are doing the same thing he did last year
2) It will save money since it costs less to sign a Tackle #1 overall than a QB.
3) The Lions need an OT anyway.

I know many took what the Lions new head coach said a couple weeks ago to mean they would be taking a QB #1 overall no matter what, but I didn't hear that from what he said.  He said that QB was an extremely important position and they had to get the right guy in there.  That can be done any number of ways.  Using a guy you already have, free agency, trades, etc.  But I'm telling you right now, the Lions will not draft QB #1 overall (the Rams won't draft QB #2 either).

HIGHLIGHTS
One thing to pay attention to, is that because of injuries to his offensive line, Stafford is constantly under pressure and taking hits, but still delivers.  This was one thing many scouts were concerned about with Sam Bradford from OU who had a fantastic offensive line and rarely ever got touched.  Could Bradford still deliver under derress?  We don't have to wonder that about Stafford.

Also note that though Georgia played out of the shotgun frequently as nearly all college teams do, they also worked from under center a great deal.  You will also notice Stafford calling his OWN audibles from time to time rather than setting up and looking to the sideline for further instructions from his coaches as is becoming more and more frequent in college football.