Rumor: 'Sounds like' Shanahan will Coach the Kansas City Chiefs 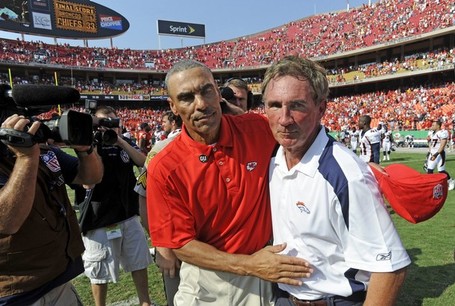 Jack Harry of NBC in Kansas City says the Chiefs should name their replacement head coach by Friday. And he says it could be former Broncos head coach Mike Shanahan.

NBC Action Sports has learned that the Chiefs are getting very close to naming their new head coach.

While we can't confirm it, we're hearing that it sounds like Mike Shanahan could be the replacement for Herm Edwards. We should find out by Friday.

This is by far the the hardest the rumor mill has ever churned for the Kansas City Chiefs. If Harry is right, I'm sure I could learn to love Mike Shanahan. My big question is: Who does Jack Harry know at Arrowhead that others don't? I can't imagine he has the best connections there as of late, considering his diatribes against Carl Peterson.

Remember, it was Jack Harry who said back on Jan. 13th that Mike Shanahan had "reached out" to the Chiefs.

For now, we're sitting on this rumor until we hear any official news.