Share All sharing options for: A Gunther Cunningham Retrospective

This isn't the most complete retrospective but it's what I could manage in the minimal amount of time I've had recently. Thanks for your patience. Oh, and share your favorite Gunther moments in the comments. -Chris 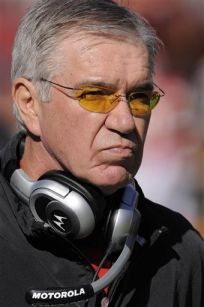 1996 was a rough in-between year. The Chiefs went 9-7 and everyone's stats suffered. The defense ended the season with mediocre rankings.

1997 was the year Gunther's defense went nuts. The team was again 13-3 and headed to an eventual divisional round loss but the defense was ridiculous. And not ridiculously bad like we've been saying the last few years. From KCChiefs.com:

In ‘97, the Chiefs broke a 63-year-old mark owned by the ‘34 Detroit Lions by not permitting a second-half touchdown in 10 consecutive games. That ‘97 Chiefs defense led the AFC in interceptions (21) and total takeaways (34), while ranking second in the NFL in third-down defense (31.6%). Kansas City’s 54.0 sacks in ‘97 were the second-highest total in team history, leading the AFC and ranking third in the NFL.

It was the age of Arrowhead. The mystique surrounding the Chiefs' home field advantage was at an all-time high. The team was perennially a game or two away from a Super Bowl. Times had been good and so were Cunningham's defenses.

Cunningham's great defenses are what allowed him to step into the head coaching position vacated by Schottenheimer after the 1998 season. Almost exactly ten years ago, Cunningham was promoted to head coach after a career as an assistant and a coordinator.

Joe Posnanski had this to say about Gunther three weeks into his first regular season as head coach.

There are a few things you need to know about Gunther Cunningham, now in his third glorious week as Chiefs football coach. He doesn't like coaches who are considered geniuses (Genius = prima donna). He has no use for anyone who doesn't want to work long hours (And he knows long hours). He demands clean offices. He knows his way around a computer. He is the most intensely loyal man you're ever going to meet.

And so the Gunther Cunningham head coach era began with an expectation of hard work and an "old school" football attitude. He was going to make the Chiefs "tough" again.

The weekly reports from the local media outlets touted Cunningham's late nights and his incredible work ethic. "Gun" was a KC guy through and through. A hard working, cussin', no BS type of guy.

Like the defenses he coached as a coordinator though, Cunningham was an inconsistent head coach.

The Chiefs started the 1999 season going 5-2. Then they lost three straight games. Then won four in a row. Then lost the final two games of the '99 season.

The '99 defense was pretty good but a far cry from the record breaking defenses that Cunningham personally handled in '95 and '97.

The offense was built upon out-Martying MartyBall. The Chiefs ran the ball 521 times for 2,082 yards in 1999. Elvis Grbac led an unassuming offense to a top 10 finish. Names like Donnell Bennett, Rashan Shehee and Bam Morris led the running back by committee.

Again, inconsistency reigned. The team started 3-3, then won two games, then lost five in a row before winning the last two out of three. The Chiefs only won 7 games in 2000.

I recall a lack of a spark in the Chiefs when Gunther was head coach. There wasn't any overwhelming sense of optimism. We had no star players really. Our QB, Elvis Grbac, never was popular. The defense was a shell of what it was just a few years before.

Gunther's failures as a head coach weren't entirely his fault. I mentioned the lack of star players. The team got rid of the one quarterback that likely would have excelled in Rich Gannon. The team was getting older and not really adding young talent at the same time. The 1999 and 2000 drafts were part of those dark draft years we've been discussing. The fan base was desperately hungry for a Super Bowl win and they had been spoiled by Marty Schottenheimer's regular season teams.

Gunther was in over his head as a head coach. He lacked a clear direction for his team. No doubt he worked hard as head coach during that time but that goes to show you hard work only takes you so far. There has to be some natural ability in there somewhere to succeed. Some leadership. Something extra beyond sweat and tears.

Off to Tennessee and then back KC

After three seasons in Tennessee as an assistant head coach and linebackers coach, Cunningham made a triumphant return to the Chiefs in 2004. We told ourselves that Gunther was no head coach but that did not mean he wasn't a great defensive coordinator. After the total neglect of the defense by Dick Vermeil, Gunther would surely save us fans thought.

Not even Cunningham could overcome the Chiefs' personnel issues on defense.

I'm not going to spend much time critiquing the last fives years of Cunningham's time in KC. Partly because we've done that so much already on this site. Partly because there was a host of mitigating factors that led to the demise of the Chiefs' defense.

Poor personnel was a big one. Cunningham made some bad decisions himself but we all know that draft day was Carl Peterson's show. Cunningham had requested certain free agents when he arrived and despite getting those players, he experienced little success.

Another reason for Gunther's problems was that he was a square peg in a round hole. Herm Edwards' Tampa 2 defense didn't jive with Cunningham's blitz 'em defenses. And Cunningham said as much when he left KC, just today.

"I’ve gone through three years of playing zone defense because I was loyal to Herm Edwards," Cunningham said today in a conference call. "That’s what he wanted. People here in town knew that I was different than that. My idea is to put a lot of pressure on the quarterback — always has been, always will be."

Surely, Cunningham would have like to have left Kansas City a winner. Unfortunately, this wasn't possible.

Like Carl Peterson, Gunther Cunningham seemed to have outlived his usefulness in Kansas City. A recent track record of such poor performance like Cunningham's doesn't allow the coach to leave in a positive light.

Like a former star player that simply hung around too long, Cunningham leaves Kansas City as a tired, worn out defensive coordinator. The years of losing, uncharacteristically bad losing, had taken their toll on the fan base, Carl Peterson, Clark Hunt and others.

And especially Gunther Cunningham. We wish him the best of luck in Detroit. He deserves it.