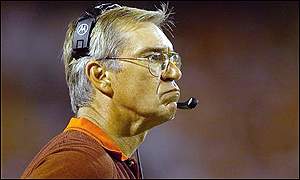 As it turns out, permission denied.

According to a league source, the Lions were initially refused permission to talk to Kansas City defensive coordinator Gunther Cunningham about taking the same position with Detroit.

Tom Kowalski of MLive.com is reporting that the Lions are still waiting for permission to speak with Cunningham.

Schwartz and Cunningham previously coached together for 3 seasons with the Tennessee Titans.

Maybe this is part of the harsh, never help your opponent attitude that permeated from Boston while Bill Belichick and Scott Pioli were teamed together.  If so, I like it.  Why help any opponent, even the slightest bit, when you don't have to?

What I don't like, however, is the possibility that Gunther Cunningham and his historically bad pass rush will still be in Kansas City next season.  Maybe the Chiefs should have granted that interview to painlessly terminate their relationship with Cunningham.

UCrawford has more discussion in the FanPosts.