Share All sharing options for: No Herm at the Senior Bowl Means a Coaching Switch is a Distinct Possibility 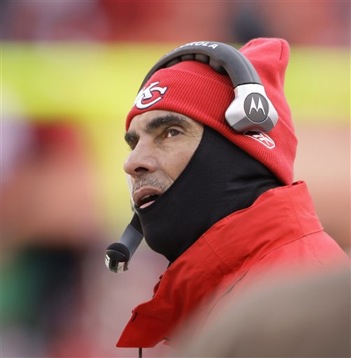 Of course, more speculation for you this morning.

The Kansas City Star reports this morning that Herm and most of his staff aren't attending the Senior Bowl festivities.

A cloud of uncertainty hovers over the proceedings, at least where the Chiefs are concerned. Edwards, who spent at least part of the day working in his Kansas City office, and some of his assistants stayed home. Included were both coordinators, Chan Gailey and Gunther Cunningham, who may soon be speaking with other teams regarding new employment.

Logic tells us that if a coach had any inkling that he'd be back next year, he'd attend the Senior Bowl. For those that don't know, the Senior Bowl is the NFL's way of showcasing all of the draft eligible talent that will be coming into the league this year.

To not have your head coach there, especially for a team that has the #3 overall pick, doesn't bode well for continuity at that position.

In fact, the more I think about it, how can Herm and his staff even do their jobs after missing the Senior Bowl? I'm not the biggest fans of scouting at games like this but it's the industry standard. You have to go.

So, does no Herm at the Senior Bowl mean he's not coming back?