Getting to Know a GM: Chris Polian

Share All sharing options for: Getting to Know a GM: Chris Polian 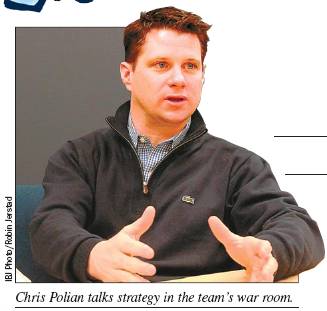 Beginning with his inception into the league as a scout under his dad, Bill Polian, with the Carolina Panthers in 1994, Chris Polian has been groomed to man an NFL franchise. His experience with successful franchises at every stop in his career is all the indication needed to prove that he would will be an outstanding GM for a franchise.

After Bill Polian was fired from Buffalo in 1993 because he didn't get along with the owner, he settled in Carolina where Chris caught on as a scout. The elder Polian, aided by his son, built the Carolina team that made it to the NFC Championship game in just their second season of existence.

3 years later the pair moved to Indianapolis where they began to build one of the strongest teams the NFL has seen in a long time.

Chris caught on as the Director of Pro Personnel in Indianapolis. The environment for success he helped cultivate there is centered on the NFL draft. The Colts simply draft outstanding. Their current squad is comprised of just 7 players that were drafted by other teams. The rest are Colts' draftees and UDFAs.

Just how successful have the Polian's been in Indianapolis? Let's look to the record starting with Chris' arrival in 1997.

2007 is a bit earlier to evaluate but it appears they will get at least 2 full time starters in WR Anthony Gonzalez and T Tony Ugoh.

He doesn't strike me as a "guru" on the draft, but someone who, as owner Jim Irsay put it, has an "intuitive ability to know football players." They invest plenty of time into the draft to give them the best shot at selecting a player that will contribute:

"We invest some time in it," Chris Polian said. "We don’t mock draft. We don’t do a whole lot of formal meeting time on it. The pro personnel department will prepare an update of what’s gone on in free agency, and what has transpired since the end of the season, so we’ll have an updated needs list as things enter the draft. But as it is on Sunday preparing the team, our focus is on what’s best for us. Since we’re drafting so late, at 30th, you have a feeling of a handful of guys who may be there. But you need to have just as many contingency plans laid out, because it’s a long day before we pick."

This is a no-brainer. The Colts have had one of the better runs in NFL history since 1999. The last 10 years have seen the Colts have 1 losing season, 2 seasons of 10 wins and 7 seasons of 12+ wins. I think that's enough that his professional career has been almost exclusively with championship caliber teams.

Remember, with the Colts winning 12+ games on a regular basis they were drafting at the bottom of each round which makes their drafting history even more impressive.

From all accounts, Polian is a leader by example. He rarely hits the Indianapolis social scene, even for Colts' functions. Marv Levy even praised his leadership:

Levy thinks Polian’s strong suits are his abilities to work with others and to focus on the task at hand. He said while Polian has ideas of his own, he is always accepting of others’ views.

What does that say to me? An innovative leader.

Blends into the Chiefs Culture

This is another no-brainer. He's not a media guy which is fitting for a midwest town in a small market. He has a sense of loyalty and a drive to succeed the right way.

Would he come to Kansas City?

This is where the dream begins to slide downhill. By all accounts, Chris is being groomed to take over the Colts' franchise. He's followed his dad at every stop in the NFL and with the elder Polian's contract due up in 2011, the word among league cirlces is that the younger Polian is next in line.

He's been a GM candidate for 3 years since 2005, including the Falcons' job last year. Colts' owner blocked the Dolphins and 49ers attempts to interview him but allowed him to speak with the Falcons last year.

Back when the Dolphins and 49ers came calling, the Sporting News had this to say:

With the Dolphins and 49ers interested in hiring the younger Polian for a general manager position, Colts owner-CEO Jim Irsay made it clear to Polian's advisor, Bob Lamont, that the Colts were intent on keeping Chris for the long haul. Irsay extended Chris' contract for four years in a deal that puts him next in line to his father's throne.

With the rich tradition of winning he's helped create in Indianapolis, why would he leave? The only possibility I can see is wanting to get out of his dad's legacy. But even with that scenario, signs point to Chris getting his dad's job in 2011.