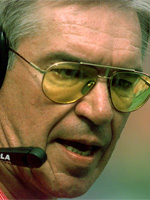 Sounds like the end of this relationship may be quick and painless:

Schwartz asked for and received permission to interview Kansas City Chiefs defensive coordinator Gunther Cunningham, who worked with him on the Tennessee Titans’ staff from 2001 to 2003.

Cunningham’s job security in Kansas City is tenuous at best, and the fact that he was one of the first coaches that Schwartz contacted is a sign of how much he is wanted in Detroit. One league source said that Cunningham is expected to be hired in Detroit.

I think Cunningham and the Chiefs should just wish each good luck and take this deal if the Lions make the offer. Cunningham's record as a defensive coordinator has been indefensibly bad for some time now. He could benefit from a fresh start as much as the Chiefs.

Also, just to remind you of how tenuous some of these reports can be, Cunningham was also rumored to be an "outside candidate" for the open Titans defensive coordinator job. That link there is a lot softer than Schefter's above.