Share All sharing options for: Getting to Know Scott Pioli (Draft Picks Edition) 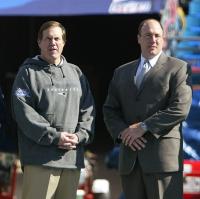 We'll be taking a look at the Patriots drafts from '00-'06.  '07 and '08 will not be judged because the players haven't been given time to fully develop/destruct.

A hit is any player that turned out to be a starter or main contributor for the Pats.  Some players only started a year or two for the Pats but are considered a hit because of their draft position (Ex: 5th round pick that starts 3 years is a hit).

A miss is any player that didn't become a starter or main contributor drafted before the 5th round.  The fickle nature of the draft doesn't allow for many safe assumptions after the 5th round.

For a full listing of the Patriots draft picks during the Pioli era, check out this FanPost by Offense of the 70s.

The first draft of the Pioli-Belichick era produced arguably the greatest draft pick ever in Tom Brady.  With a selection like that, the rest is icing on the cake.

Ed. Note: Pioli wasn't the director of personnel until 2001.

Other than quarterback, left tackle and defensive end are the most premium position in the NFL.  Pioli and the Pats nailed both positions in round 1 and 2.  Both have started every year since.

Deion Branch cost a 2nd round pick, but returned a higher value (1st rounder) in a trade with the Seahawks.

Ben Watson was also a 1st round pick and while his numbers were probably not 1st round worthy, he was a contributor for 3 years, and a starter for 2 years.

Two offensive line starters and a guy whose looking to make the Tom Brady selection in the 6th round a forgotten memory.

Maroney's been a good addition when healthy (which is becoming an increasingly bigger issue with him).

Pioli and Co. hit the important picks.  They haven't been like the Chiefs completely whiffing on 1st round picks in recent years.  Since Pioli's arrival, the only real 1st round misses are Daniel Graham and Ben Watson which even then both players started multiple years for the team (they just weren't 1st round TE material statistically).

Much has been made about Tom Brady as a 6th round selection.  From what I've heard Pioli and Belichick didn't initially want to select him but they decided to listen to their scouts.  Sometimes loosening your grip on personnel and trusting the advice of those you surround yourself with is just as important as making the final call on a draft pick.

Some interesting notes about the Patriots ability to "plug n' play" via Upon Further Review:

The last one excites me the most.  The Chiefs have had a tendency to hold onto their great players after their prime.  To pay guys based on what you have done versus what you can do.  To hold onto our glory years.  Pioli's track record would indicate he's likely learned the importance of judging a player based on what he can do for your oganization.  He's also likely learned the best time to dump a player that has high value (Ex: Deion Branch).

Regardless of whether you believe it was Belichick or Pioli making the final call on the draft, one of Pioli's jobs was to develop these scouting reports that have worked so well.  Maybe it was Belichick who gave the final okay, but Pioli gave him the information to make that decision.