Morning Update (What They're Saying About Pioli Edition)

Share All sharing options for: Morning Update (What They're Saying About Pioli Edition) 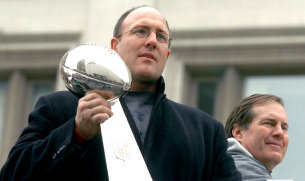 Jason Whitlock at his finest:

But when it comes to the Patriots and success, we just don’t know where Belichick ends and everybody else begins. The Patriots are like the Jackson 5, and Belichick is Michael Jackson. Crennel and Weis proved to be Tito and Jackie.

Pioli on what he's learned as a talent evaluator:

"Not to get caught up in the numbers. The things like height, weight and speed. The test numbers. It's not getting too caught up in numbers. I've made mistakes by getting caught up with the workouts. Tom Brady took some heat recently when they showed a video of his running a 40-yard dash. Tommy's speed and running has nothing to do with his pocket presence. Here is a guy, he has vision. He has the feel. He has the sense. He knows when to step up, so his athleticism is due to his awareness. Ted Bruschi, his instincts are incredible. They're rare. He plays a lot faster than what his numbers on paper would indicate. Ty Warren's strength-I remember when Ty was coming out, his overall wasn't great but he has this brute strength. Wes Welker is another guy. He has enough quickness to get away from folks."

The closest link to Bill Belichick:

As bad as those losses are, even collectively they may not equal the impact of Pioli. Bill Belichick's right-hand man for nine years, the 43-year-old played an integral role in the team’s drafting and free agent signings.

He shared an extremely close relationship with Belichick, as evidenced by the coach’s surprisingly personal statement yesterday.

But from the start, the Chiefs seemed intent on hiring Pioli.

"It was a one-horse race," a second source said.

No shortage of work ethic in Pioli:

Those close to Pioli say he is a tireless worker, some workdays lasting upwards of 20 hours. If there was an extra assignment left over from a less motivated coworker, former Murray State coach Mahoney says, Pioli would pick it up himself and do what he could before shutting the lights off for the night. Nothing could come between Pioli and football — nothing except Dallas Parcells.

He showed a great instinct for scouting players. Even more, though, he worked for any advantage, any extra information, anything that could help the team win. When the Browns were interested in drafting offensive lineman Orlando Brown, Pioli went down to South Carolina State and personally worked him out — getting knocked all over the field.

Not a lot is known about just how the Patriots operated in the draft room, but we know Belichick had the final say so. We also know he had a great deal of faith in Pioli and his scouts’ ability to match college players with what Belichick was looking for on his roster. There was most definitely a plan, and most definitely a template for physical characteristics and skills at certain positions.