No More LT in the AFC West?

Share All sharing options for: No More LT in the AFC West? 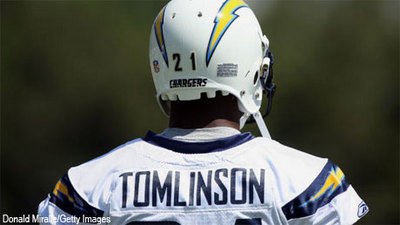 Nick Canepa of the San Diego-Tribune says the San Diego Chargers need to prepare for life without LaDainian Tomlinson.

He has three years remaining on perhaps the NFL's most lucrative running back contract. His salary cap number in 2009 will be $8.8 million, and when you consider he's now 30 and due to injury basically has been a nonfactor in the team's last two failed playoff runs, doing the arithmetic isn't necessary.

LT's fate will be a business decision and help, which the Chargers need in more than one area, will cost money. He makes a lot of it, and it's unlikely he will be asked to take a pay cut.

Darren Sproles (Did you hear he's only 5'6"?) is clearly not an every down back and the Chargers traded RB Michael Turner away to Atlanta in what appears to be a year too early.

Depending on who the Chargers get to replace Tomlinson if they do go that route, it's going to be nice to not have to prepare for an LT led rushing attack.

Bolts from the Blue chimes in the LT talk too.

Okay, this was a poor attempt to stir up talk about something other than Scott Pioli. You can use this post for Pioli talk too.