Injuries No Excuse for Chiefs in 2008

Share All sharing options for: Injuries No Excuse for Chiefs in 2008 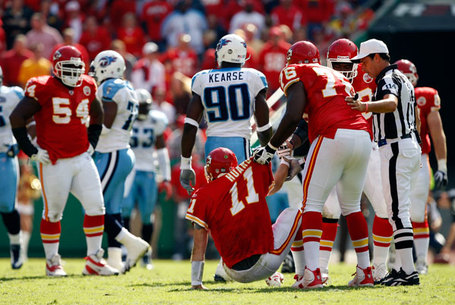 Through most of the 2008 campaign injuries to the Chiefs were viewed by some as an excuse for the Chiefs' futility.  Some others, however, insisted that it's just the way it goes in the NFL.

A recent compilation of injuries by Rick Gosselin of the Dallas Morning News proves the latter to be correct.

The Chiefs did incur injuries in 2008 that were devastating to the team.  But so did the Ravens and the Steelers, ranked as the 28th and 24th healthiest teams, respectively, of 2008.  So did the Colts (21st) and the Broncos (30th).

There's certainly a connection between health and success in the NFL.  But it's not the end all, be all that it's made out to be.  The Colts, Steelers and Ravens all ranked in the bottom half of the league in terms of healthiest teams yet all three made the playoffs.

The Chiefs actually ranked in the top half of the NFL when it came to health.  They were the 15th healthiest team in 2008 using Gosselin's system which is explained below:

There are 16 possible starts at each of the 22 positions. So it's impossible to have more than 16 games lost at any one position. For instance, Washington strongside defensive end Philip Daniels suffered a season-ending knee injury in training camp. So that's 16 starts off the top. The Redskins traded for Jason Taylor, who replaced Daniels in the lineup. Taylor missed three starts because of injury himself, but his would not count in the team total because Daniels' 16 games lost are already on the books. To count Taylor's would be double-counting at one position.

59 times this season a Chiefs player was listed on the official injury report as either questionable (50% chance of playing) or out.

I had no idea that the Patriots won the Super Bowl as the least healthiest team in the NFL.  And you know why I didn't know?  Because everyone else is facing injuries as well!  The Chiefs weren't unique in 2008.  We were almost exactly average.

While the Chiefs did incur plenty of injuries in 2008, this is not a legitimate excuse (nor should it be) when looked at relative to the rest of the league.