Brian Waters is a Blessing to the Kansas City Community

Share All sharing options for: Brian Waters is a Blessing to the Kansas City Community 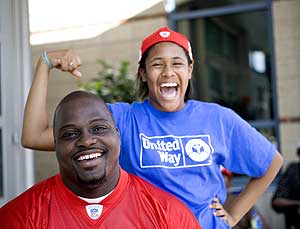 We interrupt our GM coverage for a moment to tell you about something far more important than the game of football.

In a season marred with disappointment, failed expectations and missing the playoffs, the Chiefs can still crown a champion in the 2008-2009 season.

Brian Waters is the Chiefs' nominee for the NFL's Walter Payton Man of the Year Award.

G Brian Waters has been named by the Kansas City Chiefs as its nominee for this year’s Walter Payton NFL Man of the Year award. He joins 31 other candidates, one from each NFL franchise, in consideration for the illustrious accolade. Chosen by an esteemed blue-ribbon panel, NFL Commissioner Roger Goodell will announce the recipient of this league-wide honor just prior to kickoff of Super Bowl XLIII on Sunday, February 1, in Tampa, Florida.

Waters was one of four finalists last year as well.

I would list his charitable contributions but they're far too numerous for our little space here.  As the Chiefs organization says, his support helps "underserved children and families, physically challenged, education, athletics, and health and wellness."

The Chiefs have had more NFL Man of the Year honorees than any other franchise in the NFL.  Winners include:

We may criticize our organization for releasing this guy, signing that guy or mismanaging the play clock.  But at the end of the day, the Chiefs are still the premier organization when it comes to charitable contributions off the field.

Thanks to Brian Waters countless kids will have a Thanksgiving dinner, go to college for free, receive Christmas gifts or be given a helping hand from an NFL player.

Coming from someone who has grown up and still lives in the Kansas City community, thank you Brian Waters.