What Does the Hiring of Josh McDaniels by the Broncos Mean for the Chiefs GM Search?

Share All sharing options for: What Does the Hiring of Josh McDaniels by the Broncos Mean for the Chiefs GM Search? 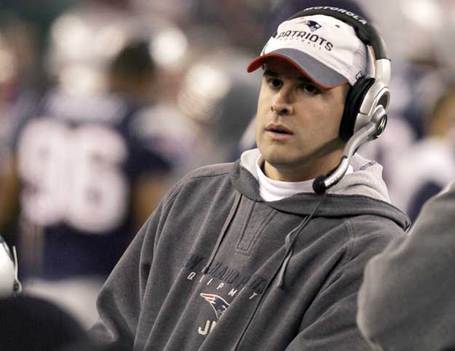 Get used to this face on the Denver sideline.

When I caught wind of the news that the Broncos have hired Josh McDaniels as head coach I didn't know what to think.  On the one hand, there's been plenty of speculation that the Chiefs #1 candidate, Scott Pioli, wanted to bring along his offensive coordinator Josh McDaniels.  On the other hand, other rumors had him linked to Iowa head coach Kirk Ferentz.

At this point, all we really know is that McDaniels won't be the next head coach of the Kansas City Chiefs.  But because Clark Hunt and Co. have been holding everything so tight to the vest, we'll have to speculate on what McDaniels' hiring means.

There are several scenarios we'll investigate.

Scenario #1: Hunt told Pioli Herm is staying for the 2009 season.

Though this possibility is out there, the likelihood of it happening isn't great.  Hunt said he would be involved in the decision making process regarding Edwards' future in Kansas City.  I've long believed that our owner is very Pro-Herm and wants him back next season.

However, many reports/speculation indicate that despite Hunt's apparent approval of Herm, he isn't likely to saddle a GM with a head coach he doesn't want.

So, if Hunt did indeed tell Pioli that Herm is sticking around, it's a good possibility that it's a deal breaker for the man in New England.  With that said, I don't see Hunt putting more emphasis on the head coach position than the GM position.  Pioli's the guy right now, and a head coach wouldn't deter the Chiefs from nabbing him.

Scenario #2: Pioli told McDaniels he is headed back to New England.

Unfortunately, I'm starting to believe this scenario more and more despite rampant reports/speculation that the two sides have intensified talks.

If you're McDaniels, I don't understand why you wouldn't want to work with someone like Pioli who has familiarity and a proven track record of success.  Maybe the two sides never had a supposed agreement that would make them a package deal wherever they went.  Maybe they did.

Either way, McDaniels and Pioli have likely been talking and something was said that made McDaniels make a move this weekend.  If the two sides had any sort of deal throughout this GM/Coach hiring cycle, then this decision would place Pioli back in New England.

Scenario #3: Pioli and McDaniels never had a "package deal" and the McDaniels hiring was a decision made independent of Pioli.

Despite all the connections between the two, the NFL is still a business and these men still make decisions based on what's best for each of them.

Remember, a case can easily be made that the Denver head coaching job is the best opportunity out there.  It's perceived that the Chiefs and Pioli been dragging their feet regarding any actual movement to a deal that would place Pioli in Kansas City.

So, if you're McDaniels, why would you wait on 'Will he or won't he' Pioli and instead take the job that he thinks gives him the best opportunity to succeed?

At the end of the day, I think this McDaniels hire does affect the Chiefs GM search.  Maybe we'll stil hire Pioli, but in my eyes this certainly has shifted the momentum of the public perception to Pioli heading back to New England.

Also keep in mind that pretty much all of our information at this point is still speculative.  We know the Chiefs don't have a press conferenced scheduled.  We know that talks with Pioli are ongoing.  But that's about all we know.  The rest is speculation.