The Chiefs In History

Share All sharing options for: The Chiefs In History 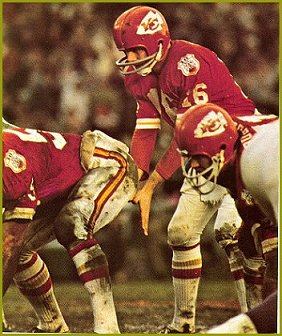 So, a while back Google added an archives section to their News section.  I have been messing around with it and found some pretty interesting articles that go all the way back to Super Bowl numero uno.

Several of the articles are cut short so that you pay to see the rest.  Taking advice from Carl, I decided not to spend the extra couple bucks to see the entire article.  Nonetheless, I captured a few of the interesting ones and posted them below that will at the very least generate some interesting discussion for those of us who were, you know, actually around to remember these events (looking at you, Lanier63).

So, after the fold, let's relive some of the good ol' days..

From the very first Super Bowl against the Packers published on January 13th, 1967 in the Ellensburg Daily Record:

If the Kansas City Chiefs are to upset the Green Bay Packers in Sunday's Super Bowl it will take one intangible - motivation - and their three main assets: Size, strength and speed.

From the Chiefs' first Super Bowl win over the Vikings published January 11th, 1970 in the Washington Post:

In 1969 football fans waited expectantly, if vainly, for the Baltimore Colts to overtake the New York Jets. Today the 80,997 witnesses in Tulane Stadium awaited only the final gun, so total was the Chiefs' domination.

Marty Schottenheimer has been stubborn even before the day we hired him:

Kansas City's 310 rushing yards against the Lions was the most in an NFL game in three years. The total yesterday was the team's lowest this season.

Joe Montana and Marcus Allen light it up.  From Christmas day in 1994:

"The plan was to run the ball," said Allen, who surpassed the 10,000-yard rushing mark for his career with 10,018. "The plan was to wear them down. I think-and not giving any disrespect to (the Raiders)-that the Chiefs have always felt superior in terms of their conditioning and things like that."

Yet, the outfit that was 13-3 last year and picked by so many experts for this season's Super Bowl has not walked off the field a winner since Oct. 4. In the ensuing seven weeks, including a bye week, they've been humiliated and humbled, disgraced and broken-hearted. They've plunged from a confident 4-1 to an unnerved 4-7.

The promote from within and hire Gunther Cunningham on January 23rd, 1999:

Cunningham, 52, promised that even though his background was exclusively in defense, he could help solve the offensive problems that contributed to a 7-9 record last year, when the Chiefs were expected to challenge for the Super Bowl.

"I think Gunther did everything he possibly could to help us be successful. No one worked harder or with more dedication. However, it didn't work out. In my conversations with Gunther over the past week, I told him other people in the organization had failed him. Players let us down, coaches let us down, football support people let us down, I let him down."

Didn't know this - the Chiefs were willing to use the 16th overall pick on Larry Johnson:

The Chiefs were poised to take Johnson in the 16th spot, but they traded the pick instead to Pittsburgh. The Chiefs received the Steelers' first-round choice, 27th overall, as well as third- and sixth-round selections.

And, as we all remember just a couple years ago, our [other] fearless leader passed away:

"In creating the AFL, he likely did more to change the NFL over the last half-century than any other single person," said New York Jets CEO Woody Johnson. "Without Lamar Hunt, there would be no Super Bowl, a term he originally coined, and there would not be a New York Jets franchise."

For those of you wishing to search the Google News archives, click here.