What They're Saying About The Chiefs Loss

Share All sharing options for: What They're Saying About The Chiefs Loss 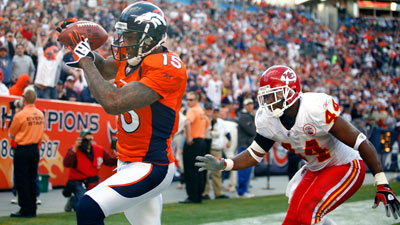 Luckily, they moved all McDonald's wrappers from the end zone so Marshall is safe.

Jason Whitlock doesn't see a pass rusher on the roster and advocates selecting a young quarterback in the draft:

Obviously, this has to change next season. The Chiefs can’t sell the myth that their pass-rush specialist is currently on the roster developing. He’s not. They’re going to have to find him in the draft.

Herm Edwards on the decision to go for the touchdown late in the game:

Adam Teicher says there are comparisons between the Chiefs decision to go for two against San Diego and Sunday's 4th down attempt at a game winner:

Thigpen looked for Gonzalez, who was held up at the line. Thigpen tried an ill-advised pass rather than scramble for the two points and the Chiefs lost by a point.

The Broncos 3rd down conversions, especially on the last drive, makes me want to pull my hair out.  Teicher again:

Their inability to get much of a pass rush cost them twice on Denver’s final possession. Jay Cutler passed 19 yards to Brandon Marshall on third and 10 from the Denver 1. On third and 9 from the 21, Cutler had time to throw to Tony Scheffler for 11 yards. That took the game to the 2-minute warning.

Well, I hope when you are the one most responsible for the Chiefs about to shatter a 27 year old Hall of Shame record for sacks I'd be upset too.

Hali admitted it’s getting to him, but he also admitted it has been that kind of year for Kansas City.

Let's end on a positive note:

WR Dwayne Bowe has 137 receptions and 1,842 receiving yards, the highest reception and receiving yardage totals by any player in his first two seasons with the Chiefs.