Tony Gonzalez: 'This Is A Playoff Team Next Year'

Share All sharing options for: Tony Gonzalez: 'This Is A Playoff Team Next Year' 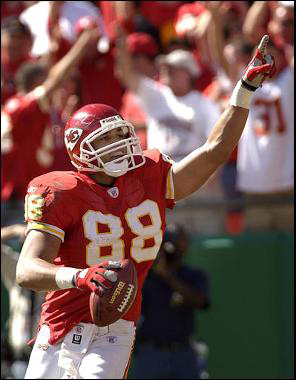 Hey, what's he pointing at?

I wanted to piggyback on a few of the comments schraggyj made in this FanPost regarding Tony Gonzalez's post-game comments.  He made three key points that need to be addressed.  First, he fully endorsed Tyler Thigpen as the 2009 Kansas City Chiefs starting quarterback.  Second, he said he that although he can see himself finishing his career as a Chief (with Thigpen at the helm), he hasn't determined his future in football yet.  Third, he stated that this is a playoff team next year.

Asked about the possibility of the Chiefs addressing the quarterback in free agency or the draft, he said that would be a "disgrace" and stated, "We've been playing well since he came in."

"You already got your quarterback," Gonzalez said. "You get something else to help us."

Tony makes an excellent point that, I think, has been covered around here ad nauseum.  There's no question he's part of our '09 plans but has Thigpen played well enough (or enough in general) to go into '09 as the starter?

Then there's this from Bill Williamson of ESPN:

"I don't know what I will want to do in two months," he said. However, Gonzalez did say he can see himself finishing his career in Kansas City with Thigpen as the quarterback. Thigpen had already left the locker room when Gonzalez made his comments.

"We're close on offense, we're close," Gonzalez said. "I think they are going to get some pieces on defense so the defense can catch up with us, but we're close. Right now, I'm a Kansas City Chief and I know we're close."

The key phrase there is "Right now, I'm a Kansas City Chief..."  Gonzalez's future is still uncertain at this point.  Despite our improvements and despite what he says about us being "close", there's basically no change in the 'Will he' or 'Won't he' when it comes to Tony's future in Kansas City.

Finally, Tony said that this team should be looking to the playoffs next year.

"I could see this being a playoff team next year," Gonzalez said. "I could see us turning it around."

Tony is the consummate professional.  He'll never throw anyone associated with the organization under the bus (trade deadline fiasco excluded), unfairly criticize or bring anything but optimism when he's speaking to the media.

Tony's comments certainly resonate with me.  I can see where he's coming from.  But, at the same time, I can't forget that no more than 2 1/2 months ago he was the one clamoring to exit this organization.  He wanted out and, as far as I can tell, not much has changed since then so why would he want to stay in Kansas City next year now?