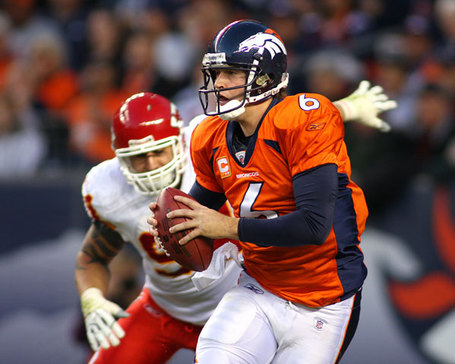 The Kansas City Chiefs put up their worst offensive effort in the Tyler Thigpen era (Week 8 forward) in points, yards and they had the fewest offensive plays of the last seven weeks.

All around, a weak, dismal effort against a divisional rival. Let's see what went wrong.

Forced the ball down our throats

The Denver Broncos had the ball for nearly 37 minutes and 20 of those minutes were in the second half.

Bottom line, the Broncos controlled every aspect of the second half of this game. The Chiefs never got going until the end of the game when they were stuffed on the goal line. That fourth quarter drive is the one bright spot in the second half for the Chiefs and we didn't even score.

Checking in on the worst pass rush ever

No sacks this past weekend. What? You really thought the Chiefs were going to get to Jay Cutler? Yeah, me neither.

Between Larry Johnson, Tyler Thigpen and Jackie Battle, the Chiefs ran the ball 18 total times and 11 of those attempts were in the first half by Larry Johnson. The running game was really only effective when Thigpen scrambled or ran the QB draw.

On the Chiefs' final push to tie the game in the fourth quarter, here's how that final drive broke down:

The Chiefs barely tested the run in the second half and they weren't even losing until a few minutes into the fourth quarter.

Would an increased load in the running game have made a difference? Likely not. The Chiefs got few chances in the second half to win this game on the offensive side of the ball. It wasn't necessarily about the offense- it was about the defense.

The Chiefs' defense is wholly unreliable

Against the Jets and the Bucs, if the Chiefs had made a defensive stop at the appropriate time, we win both of those games. Yesterday, if the Chiefs' defense is able to hold a Denver team pinned at it's own 1 yard line to only one first down, we have a great shot at winning.

But, this defense didn't do any of those things. It hasn't been reliable all year long. Everyone, everyone knows our defense is going to fold. Herm knew it yesterday. With the game tied in the fourth quarter, the Chiefs had the ball on the five yard line with almost five minutes left.

Did "conservative" Herm kick the field goal? Nope. Even he knew our defense couldn't hold the Broncos and unfortunately, we found out a few minutes later he was right.

When your defense is so bad it causes Herm Edwards to not be conservative, you know you've got a stinker.

Both teams heading in to this game were at the bottom of the league in run defense. One team took advantage of that weakness. Another did not.

With the help of a 7th round draft pick who eventually had to leave the game due to injury, the Broncos racked up 139 yards rushing on 30 attempts. The funny thing about that? When the Broncos had the ball with the game winding down needing to kill time, what do they do? They pass the ball. In fact, on the Broncos' final drive, they ran one end around and that was it for rushing plays. It's almost as if they were throwing that in the Chiefs' face after the Maurice Leggett pick 6 in the first half.

It's the defense, stupid

The Chiefs have three if not four wins if their defense is even below average. But it isn't. It's terrible. And the defense doesn't even have any bright spots on its resume.

Gotta clear the defensive coaching staff. Gotta get new linebackers. Gotta get a pass rusher. Gotta do something this off season.

Too much Bowe and Gonzalez

Sounds weird, right? 12 of Tyler Thigpen's 17 completions were to either Bowe or Gonzalez. It was the smothering of Tony Gonzalez on that 4th and goal play that prompted Thigpen to tuck and run.

Yes, Tony Gonzalez is awesome. Yes, we should throw it to him as much as possible. But that doesn't mean we shouldn't spread the ball around.

The Chiefs got a bit one dimensional in the passing game towards the end of the game and I don't think it overly hurt them but it didn't help either.

The Broncos only punted once.

The Chiefs' defense gave up over 400 yards of offense. Again.

Besides the pick 6, Jay Cutler was amazing. 32/40 for 286 yards and two touchdowns. No sacks either.

C Rudy Niswanger left with an apparent knee injury. Oddly enough, he went down with a knee injury in Week 13 last year too.

As much as I hate to say it, Brandon Marshall is a fantastic receiver. Three of his eleven catches were 3rd conversions for first downs. One of his touchdown catches was on 3rd and goal from the 12 yard line. Cutler and Marshall are a deadly combination.