Chiefs' Chances at Pioli Coming Down to the Wire

Share All sharing options for: Chiefs' Chances at Pioli Coming Down to the Wire 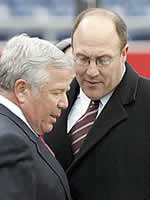 The Browns interest in Scott Pioli is apparently causing the Chiefs to act.  Quickly.  Kansas City has officially requested permission from the Patriots to speak with Pioli.

This likely means that the Browns, who also contacted New England offensive coordinator Josh McDaniels about their head coaching vacancy, are going to step up their efforts to land Pioli.

The Browns are in New England meeting with Pioli today.  Per Adam Schefter of the NFL Network:

Those within the league say the Browns would like an answer from their leading candidate, Scott Pioli, today. The Browns are meeting with Pioli in the New England area today. If Pioli takes the job, the Browns general manager search is over and the search for a new head coach will commence.

The Browns are apparently putting the pressure on Pioli because they're looking behind their shoulder as the perceived leader in the clubhouse for Pioli's services and see the Chiefs coming.  Per the Boston Herald:

With the Chiefs now officially putting their hat into the ring, it could lead to a situation in which the Browns put the full-court press on Pioli assuming their meeting with him goes well.

The Browns have also contacted Falcons' President Rich McKay about the GM vacancy.  It's possible that contacting McKay was a way to garner leverage on Pioli by showing him they are willing to go in a different direction.

By all accounts, the Browns are the leaders for Pioli.  The Chiefs, if Pioli is indeed their #1 candidate, are getting backed into a wall and need to act.

What are you going to do, Clark Hunt?