Share All sharing options for: Bowl-Bound Offensive Players to Watch 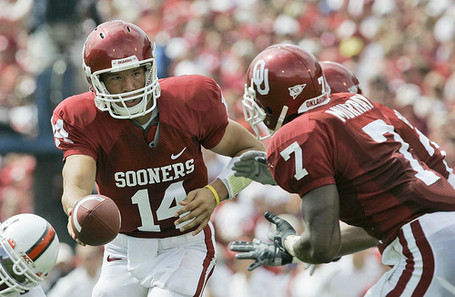 I think we can all agree that the Kansas City Chiefs are taking either a quarterback or an offensive tackle with the #3 overall pick, should they choose to keep it. I've chosen QB Sam Bradford, QB Matt Stafford, OT Michael Oher and WR Michael Crabtree (to mix it up) as guys to watch this week and next.

Yesterday, we went over the top defensive players to watch in Bowl games this week.

Anyone else you want to point out as a To Watch player in a bowl game, let us know in the comments.

Before you start arguing that the Chiefs would never draft Michael Crabtree at the #3 spot (You're right, they wouldn't), he's a top prospect that may or may not come out of school this year and worthy of taking a look at. Even if the Chiefs don't have any real interest in drafting him.

Living in Austin, almost everyone I encounter dislikes Michael Crabtree first for being a Red Raider and secondly for his last second touchdown earlier this year that give the Texas Longhorns their first loss of the season.

Here are Crabtree's stats and a highlight reel.

Along with Michael Crabtree, the Cotton Bowl will also include QB Graham Harrell, another top notch prospect.

Michael Oher has been in the media spotlight since 2006, when he appeared in a book called Blind Side. He's also happens to be famous for being a pretty good football player. Kansas City Chiefs Director of College Scouting, Chuck Cook, had this to say about Oher:

"He's got the best feet I've seen in years for an offensive lineman.  He's very physically gifted and there really isn't anything he can't do at left tackle.  I can't imagine anything other than major injury that would keep him from coming into the league and playing well at left tackle for the next 10 or 12 years."

Here is a couple of clips from a game earlier this year.

Oher has also been a popular mention here, showing up in 109 comments.

If you follow football at all, and especially if you live in Big 12 country, you've heard about Oklahoma QB Sam Bradford for some time now. I won't spend much time dissecting the Heisman Trophy winner. Here are some highlights of his. He will definitely be on a number of team's radars come April.

Bradford is possibly at the top of the Chiefs' draft wish list.

I haven't seen much live action of Matthew Stafford but I've been hearing his name a lot since before last year's draft. He's definitely not as good as Sam Bradford. I've always been skeptical of the footage I did see on him and the info I did gather. He'll be a high pick almost no matter what though.

That's it on the Bowl players for now. Since it is New Year's Day tomorrow, we may be a touch late on our morning post. You know, we'll be staying up late and stuff. We will be putting up an open thread tomorrow for the Bowl games, so you can discuss all of these players were talking about.