Getting to Know a GM: Eric DeCosta

Share All sharing options for: Getting to Know a GM: Eric DeCosta 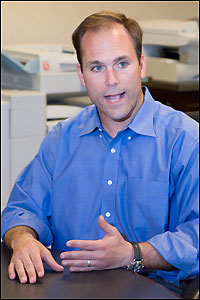 Yesterday Chris Mortensen reported that there were 4 candidates under consideration by Clark Hunt for the GM position. One of those was Eric DeCosta, the Director of College Scouting for the Baltimore Ravens. He's been a member of the Ravens organization in some form or another since 1996. His background is in personnel and scouting

The Ravens hired DeCosta in 1996 as a player personnel assistant. His career got off to the right start with the Ravens 1996 draft. Baltimore selected 2 future Hall of Famers in Jonathan Ogden (Round 1) and Ray Lewis (Round 2). The next draft (1997) brought 4 players (Peter Boulware, Jamie Sharper, Kim Herring and Jeff Mitchell) that started 6 or more years.

After two years, he moved up as the Mid-West Area Scout, a position he held for 5 years. Through this 5 year tenure the Ravens were excellent at drafting. However, his first 2 seasons in this position were a bit rocky, only (only?) finding 2 players (Chris McAlister and Edwin Mulitalo) that have started 8 years. Duane Starks has been a serviceable player for the team throughout his career as well.

As I went over the Ravens drafting habits I noticed something interesting. They rarely missed on the 1st day picks. Whether this is a credit to DeCosta and the rest of the scouting staff, I don't know. But a good indicator of how a person in DeCosta's position (only worked in one environment) will respond is their current environment.

2000 had Jamal Lewis and Travis Taylor in the 1st round. Both 7 year starters.

2001 had Todd Heap, Gary Baxter, Casey Rabach and Ed Hartwell. All have started at least 3 seasons for the Ravens.

His drafts since haven't been as star-studded but still impressive considering 2004 is only 4 years out.

The point is that DeCosta's been involved in an organization that has stressed the importance of the draft. They have succeeded in that respect. The most impressive thing I noticed was how successful the Ravens (and DeCosta as the Director of College Scouting) have been on nailing the 1st day picks. This means that they're usually picking up impact players.

That said, if DeCosta really is a candidate as Mortensen has reported, his resume speaks for itself. He works closely with GM Ozzie Newsome but ultimately doesn't have final say.

Coach Billick has a certain amount of input, but what it really comes down to is Ozzie and me, and ultimately Ozzie. I may not always agree, but he's got the final say.

Over the last couple of years I've had the opportunity to kind of learn on the fly. Ozzie and I have had a lot of good discussions this year, and I feel excellent about the work that everybody's done. I've spent a lot of time looking at players. I've basically graded about the top 175 players that we have ranked. I think the process that we have in Baltimore has been proven over time to be a very good process. And we've really deviated very little from that process. Time will tell, but I think we're in a position to pick some good players this year.

If he's looking for a job with final say then Kansas City can offer him that.

Does he fit Clark Hunt's expectations of a GM?